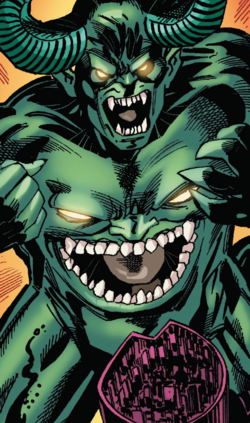 Satannish is one of the most powerful demons Earth has ever known. He was created by Dormammu, who placed him as an undercover agent inside the Hell-Lords.[7]

Satannish lives in a dimension adjacent to Earth's, of which he is the lord. In spite of not dwelling in the Earth, Satannish has had contact with Earthlings throughout the centuries. The demon promised superhuman powers to his followers, in exchange for their souls. Some of these followers formed a cult to the demon, known as the Sons of Satannish.[citation needed]

The Sorcerer Supreme of Earth, Doctor Strange, could invoke at Satannish by means of enchantment, but Strange prefers not to do it since Satannish is too powerful. Thus, the first occasion in which Satannish and Strange met, was as a result of the acts of the wizard Lord Nekron. Lord Nekron had reached an agreement with Satannish, by means of which the demon would increase Nekron's powers during a year until finally, he became immortal. In return, Nekron would give his soul to Satannish. Nevertheless, Satannish said to him that if Nekron obtained the soul of another wizard, in return could conserve its powers and would be immortal. The last day of the year, with his powers at their maximum, Nekron faced Doctor Strange. Nekron hoped to give Strange's soul to Satannish instead of his own. The wizards fought in a dimension where time could be manipulated differently than Eath's. Doctor Strange soon gained advantage in the battle, and altered time so that the twenty-four hours of the last day of Nekron's year passed more quickly than normal, expiring Nekron's power. As the year had finished, Satannish demanded the soul of Nekron, imprisoning the wizard in the demon's dimension.[citation needed]

A time later, a group of the Sons of Satannish led by Asmodeus, which was allied with Dr. Charles Benton, a respected doctor of New York, began to conspire against Doctor Strange. Asmodeus mystically controlled Clea, the friend of Doctor Strange, and used her to rob the Book of the Vishanti from Strange's collection. The Sons captured Strange, and they expelled them to him and Clea to another dimension. With the Book of the Vishanti, Asmodeus knew of the existence of the enchantment of the Fire and the Ice, with which he could invoke at the fire-demon Surtur, and the ice-giant Ymir so that they may destroy the Earth. Seeing that he no longer needed the aid the Sons of Satannish, Asmodeus exiled the others to the dimension governed by Tiboro. On the other hand, Strange and Clea escaped from the dimension where they had been imprisoned, and Strange faced Asmodeus in mystic combat, which was too much for Asmodeus' heart. Nevertheless, before falling he invoked a spell, and summoned Surtur and Ymir. Doctor Strange and Dane Whitman, the Black Knight, rescued the other Sons of Satannish from the dimension of Tiboro. Then, while the Avengers fought against Ymir in Wakanda, and another group of Avengers fought with Surtur in the Arctic, Strange discovered that by using certain crystals, he could access enough power of the Sons, to use against Surtur and Ymir, defeating the pair.[citation needed]

Satannish was united shortly after with other demons, Mephisto included. The great rival of Doctor Strange, Baron Mordo, agreed with both, Mephisto and Satannish, so that they gave him to be able, like result, both demons demanded for himself the soul of Mordo, and both were arranged to destroy Earth in their dispute. Both, Satannish and Mephisto got involved mystically in a brutal battle on Manhattan, hidden to the inhabitants of the city. Finally, Doctor Strange sent a spell by means of which both demons would finish united in a single one being if they did not leave Earth. Refusing to lose their individuality, both demons left Earth and resigned to obtain the soul of Mordo.[citation needed]

Satannish, as the demon Cloot, was invocated by Charlie Ronalds to slay Guido Carosella and X-Factor.[8]

Intending first to kill him, Cloot eventually give him the access to his realms and the souls therein, claiming there was a lot of them with hatred for X-Factor, and that he had no sympathy for them, since their association with the Hulk.[8]

He then transformed Ronalds into his Charon, as a deal to carry souls to Cloot's realms against power, and leave.

Hearing that Charon intended to kill Guido without having his soul, he came back and showed Charlie the truth about his parents, his mother being a "high-price hussy" and his father her "manager", who were residing in Cloot's realm. He then absorbed Charon in his dimension and left.[8]

Satannish contacted with Jason Roland, who would be known as Hangman.[9] Satannish wanted to use the Hangman to rob the souls of Earth's inhabitants using the television. The Hangman, by order of Satannish, recruited the Night Shift, which increased his powers in exchange for their souls. The West Coast Avengers then defeated the Night Shift.[10]

Later, Satannish, wishing to take revenge himself ob the West Coast Avengers, the demon offered Roland the possibility of recovering his soul. Satannish offered four allies to him, in form of four super-powerful beings animated by four of the souls that inhabited their kingdom, were the souls of Josef Stalin, Lucrezia Borgia, Lizzie Borden and Heinrich Himmler, who next to the Hangman formed the Lethal Legion. This Lethal Legion fought the West Coast Avengers, and kidnapped one of them, Mockingbird, taking her to his kingdom. The Avengers travelled to the kingdom of Satannish to release Mockingbird, making a brief involuntary shutdown in the kingdom of Mephisto, that the demon took advantage of to occupy the body of Hawkeye, and to be able to travel thus to the kingdom of Satannish. Once in the kingdom of Satannish, the West Coast Avengers fought against the Hangman and his men, and finally were captured, was then when it appeared Mephisto, arranged to take control of the souls of the Lethal Legion, began then a battle between both demons, who took advantage of the Avengers to escape.[11]

The mystical forces unfolded by both demons threatened reaching the Earth, and to finish the battle, the Scarlet Witch sent a spell that threatened both kingdoms, those of Mephisto and Satannish, into merging, to avoid this, both demons returned to their kingdom. At the end of the conflict Mockingbird, who had only just been rescued from Satannish's realm by the Avengers, was killed.[12]

When Dormammu glided to seize several infernales kingdoms, Satannish met with Pluto, Hela, Daimon Hellstrom and Mephisto to plan a counterattack. Hela and Pluto, who comprise of divine pantheons, rejected the alliance of the other three infernales governors. Satannish and Daimon ended up betraying Mephisto, praising themselves/pouring off in favor of Dormammu, since the being said that he had been the creator of Satannish and the father of Daimon Hellstrom. Nevertheless, their plans of conquest did not prosper thanks to the intervention of Hellcat. Apparently all these own revelations are lies of demons.[13]

He was seemingly killed by Mephisto[14], but it was revealed that when a Hell-Lord dies, his soul is sent to his personal Hell realm again.[15]

Satannish joined in the battle against Galactus after the former was brought to the Mystic Realms by the sorcerer Zoloz. He confronted the World Devourer after he absorbed Satannish's creator Dormammu into his being. The fight seemed to be in Satannish's favor until Galactus began to absorb the Hell Lord's essence into himself. At the last minute Satannish begged Galactus to allow him to live so he can serve him but Galactus said he had already helped him by combining his energy with his.[16]

As a Class Two Demon, Satannish is one of the most powerful known demons, seemingly second only to Mephisto.[17] He possess great mystical powers that allow to open portals, to send mystical rays, to create mystical barriers and other multiple abilities.He is stronger in his dimension.

Like this? Let us know!
Retrieved from "https://marvel.fandom.com/wiki/Satannish_(Earth-616)?oldid=6169043"
Community content is available under CC-BY-SA unless otherwise noted.