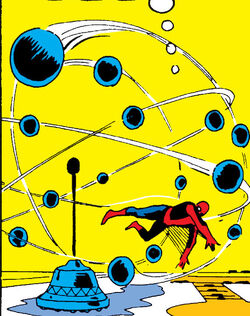 Doctor Doom developed this device early in his career, and found a chance to test it during his second encounter with Spider-man in Doom's hidden laboratory at New York City. The machine included metallic spheres orbitting a magnetical core. The balls were virtually unstoppable and presented a real threat when approaching an enemy. Spider-man disabled the machine by covering the core with web, thus nullifying the power source of the spheres. The spheres fell harmlessly to the floor… except because later Spider-man tripped on the balls and fell, giving the advantage to Doom. Doom was forced to retreat from the fight just at that point.[1]

Retrieved from "https://marvel.fandom.com/wiki/Satellite_Machine?oldid=4478136"
Community content is available under CC-BY-SA unless otherwise noted.