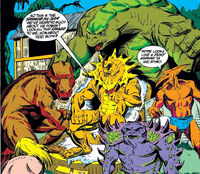 Base of Operations
Savage Land
Affiliations

The Saur-Lords are genetically modified uplifted dinosaurs created as servants by the High Technician in his time in the Savage Land.

When A.I.M. came to the Savage Land they attacked and caught Ka-Zar and were taken to the Saur-Lords. The Saur-Lords were not impressed due to him being a human. Zabu was later attacked by two of the Saur-Lords, but Captain America came to his aid. Together the pair battled the dinosaur men but eventually A.I.M. surrounded them and they were ordered to surrender.

Diamondback disguised as an A.I.M. agent, rescued them by causing disruption in the Saur-Lords' ranks. Diamondback shot the Saur-Lord called Allo, but Anky continued to fight even though Zabu eventually won. They met up with Falcon and continued their journey.

The Saur-Lord Pter abducts Maza, a native of the Savage Land, from the Black Panther's Skycycle. Black Panther then tracked the dinosaurs to their citadel. Anky and Allo recovered and were found by the A.I.M. agents. The Dino-Lords consisting of Pter, Styro and Bront fought the trio of heroes at the citadel after their master the High Technician was knocked out.

Suddenly, the citadel was attacked by the alien invader Terminus. Styro and Pter attempt to protect their master from Terminus, but both their efforts were in vain and they were tossed aside like flies.[1]

Retrieved from "https://marvel.fandom.com/wiki/Saur-Lords_(Earth-616)?oldid=5550189"
Community content is available under CC-BY-SA unless otherwise noted.