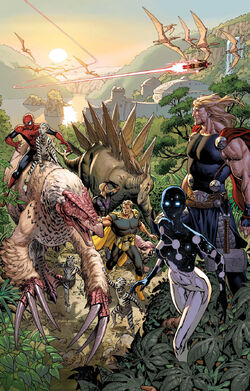 You know this is where super heroes go to get eaten by dinosaurs, right?

The Savage Land, set in Antarctica at the base of the Palmer Peninsula, is a tropical prehistoric land surrounded by volcanoes deep. It is a tropical preserve hidden from the rest of the world.[1] It is located at approximately 69º 30’ S, 68º 30’ W.[citation needed]

Over time the Savage Land became home to various outsiders, some by accident and other to exploit the people and the natural resources. Some of the residents include:

Two ships became stranded in the Savage Land during World War II; the Neu Deutschlanders and the New Britannia. They married local women and continued the feud into modern times.

The High Technician who, like the High Evolutionary, became a temporary resident and created the Saur-Lords (consisting of Styro, Bront, Pter, Allo, Anky).

There are many types of races in the Savage Land and Pangea. The Nuwali transported primitive man now known as the Man-Apes, which unlike the rest of the world thrived until the 21st century. The next arrivals were the Ancient Atlanteans, who added the region as part of their empire. They used the Nuwali technology to mutate the Man-Apes into various Beast-Men to perform certain tasks. These slaves rebelled after the great Cataclysm and made Pangea their home. Many Atlanteans remained and their descendants became the various human tribes, with some clinging to the old ways and technology but most forget and resort to more primitive hunter gather society's.

Examples of Savage Land races include the bird people called Aerians, the monkey-tailed Tree People, the amphibious Tubanti fish-people of the inland Gorahn Sea, the Lizard Men of Vali-Kuri City, and the nomadic cat people of Pandori. Popular races in the Savage Land are the Man-Apes, the Lemurans, the Pterons (pterodactyl-like people), the human Sun People, the Swamp Men, and the Zebra People.

Avalon was a haven for humans and mutants, located in the a temperate zone of Antarctica, away from Apocalypse's violence. It was led by the precognitive mutant Destiny. Her adopted son Cypher provided a field that allowed everybody to understand each other despite speaking different languages. Avalon's peace was destroyed by the Shadow King who mind-controlled its inhabitants into killing each other. With most people in Avalon slaughtered, Destiny left her home to get revenge on those who had slain her people, Avalon has since been abandoned.[6]

The Savage Land was a large island in the southern hemisphere and was where Magneto's original base was located.[7] Its dinosaurs were originally conjured by Scarlet Witch as a result of her reality warping abilities.[8] The aboriginal inhabitants were wiped out and only a small tribe of survivors including Ka-Zar and Shanna remained.[9]

On Earth-7642, the part of the landscape of the Savage Land was disrupted by the teleporting city, Arcadia. It was placed their by Tyrax and used as a base by him and his minions, the Savage Land Mutates. Despite the fact that Tyrax left Earth, the Savage Land continues to contain Arcadia.[10]

Like this? Let us know!
Retrieved from "https://marvel.fandom.com/wiki/Savage_Land?oldid=6502673"
Community content is available under CC-BY-SA unless otherwise noted.