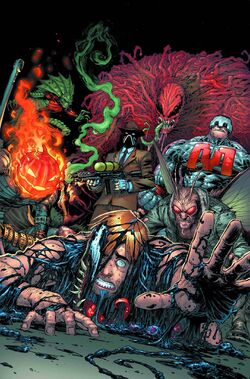 The Crime-Master created his own super-villain team called the Savage Six by assembling Death Adder, the Human Fly, Jack O'Lantern, and Megatak upon offering them protection from the law and Kingpin. Venom was planning to take out Crime-Master only to be stopped by Eddie Brock. After a fight with Venom, Jack O'Lantern discovered Eddie Brock webbed up as Crime-Master forcefully bonded Eddie Brock to the Toxin symbiote. The Savage Six targeted the people Venom cared about including his family and Betty Brant.[1]

Jack O'Lantern, in his human guise, went first and targeted Betty Brant only to end up fighting Venom. During the fight, Megatak assisted Jack O'Lantern and punched Venom's phone before he can make a call to the Avengers for help. While getting Betty away from Jack O'Lantern and Megatak, Venom was attacked by Toxin, who is in full control of Eddie Brock. Venom managed to use a sonic version of a pepper spray to immobilize Toxin before getting away.[citation needed]

The Savage Six soon began to target Betty Brant's family, so Betty and Venom left to go warn them. They arrived at the home of Betty's mother where they found Human Fly about to eat her. Megatak had also been monitoring the phone lines when it came to the loved ones of Flash Thompson. Jack O'Lantern then targeted Jesse Thompson and ended up fighting Venom. Venom grabbed Jack O'Lantern's gun and fired on him before Jack O'Lantern spewed acid on him causing Venom to cool down in the fountain. Although Venom managed to get Jesse to safety, Toxin managed to capture Betty Brant while the Human Fly was eating the leftovers of what was supposedly Betty's mother.[citation needed]

Venom continued to look for Betty and ended up killing Death Adder after ripping Human Fly's wings off to learn where Crime-Master was located. When Betty was brought before Crime-Master, she was shocked when he revealed himself to be her brother, Bennett Brant. When Venom arrived at Crime-Master's hideout, he defeated Megatak and severely burned Toxin. Bennett Brant almost killed Venom with a sonic pistol and a flamethrower, but was shot and killed by Betty. When Venom began to make a comment on this, Betty stated that her brother "died a long time ago."[citation needed]

Retrieved from "https://marvel.fandom.com/wiki/Savage_Six_(Crime-Master%27s)_(Earth-616)?oldid=5326670"
Community content is available under CC-BY-SA unless otherwise noted.