What other dark horrors does this ship hold?!

Appearing in "The Cult of Koga Thun – Part One: Shipwrecked"

Synopsis for "The Cult of Koga Thun – Part One: Shipwrecked"

Appearing in "The Shadow of Vengeance: Chapter I"

Synopsis for "The Shadow of Vengeance: Chapter I"

THE ANCIENT CULT OF KOGA THUN. A MYSTICAL TREASURE. AND THE ONLY MAN WHO CAN SAVE THE HYBORIAN AGE!

Adrift at sea. No food. No weapons. Death surely awaits him. But the lionhearted CONAN is not so easily subdued, by Crom! When Conan finds himself captured, he unleashes his might on an unsuspecting pirate crew…one whose dark secrets will plunge Conan on the trail of an ancient treasure that may prove to be his undoing!

Welcome to the deadly Hyborian Age—hope you survive the experience! 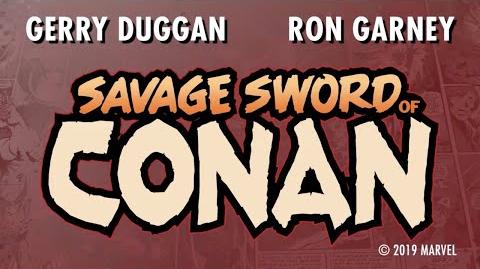 Retrieved from "https://marvel.fandom.com/wiki/Savage_Sword_of_Conan_Vol_2_1?oldid=5239618"
Community content is available under CC-BY-SA unless otherwise noted.