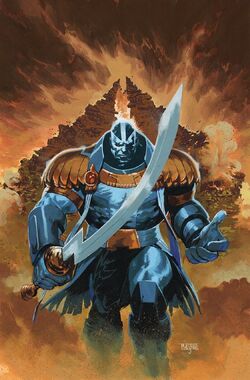 The Scarab is a sword crafted in four parts by Isca the Unbeaten, as a celebration to the birth of the four children of Apocalypse and Genesis.[1]

On the ancient mutant land of Okkara, after the four children of Apocalypse and Genesis were born, Genesis' sister, Isca the Unbeaten forged the Scarab, a sword in four parts to celebrate their birth. The sword was recast from royal Uhari blades made of Red-Gold Iron. The Scarab was seen as a symbol of the kingdom of Okkara.[1]

When Okkara was invaded by Amenthi forces, Apocalypse wielded the Scarab to defend his land.[2] After Okkara was torn into two lands and Genesis and the four children left to Amenth, Apocalypse mourned their departure for a millenium. After that period, he broke the Scarab into four parts again and buried each part in a different tomb inside the Temple of the Horsemen.[1]

During the attack of the First Horsemen of Apocalypse on the Starlight Citadel, Saturnyne intervened and set a contest where the forces of Krakoa and Arakko would each have ten swordbearers fighting in Otherworld.[3] Apocalypse was one of the Krakoans chosen to wield a blade, his sword being the Scarab.[4] After recovering from an infection caused by his own daughter, Pestilence, Apocalypse went to the Temple of the Horsemen with Gorgon, where he destroyed the tombs of his children and recollected the Scarab pieces inside them. After reassembling the sword, he returned to Krakoa.[1]

As decided by Saturnyne's tarot cards, Apocalypse had to fight his wife Genesis in the last battle of the contest. In this battle, Scarab was shattered by Genesis's Twilight Sword.[5]

Like this? Let us know!
Retrieved from "https://marvel.fandom.com/wiki/Scarab_(Sword)?oldid=6482397"
Community content is available under CC-BY-SA unless otherwise noted.