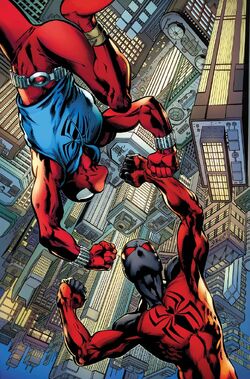 Well, at least you had the sense to not fight crime in a sleeveless hoodie, but that's neither here nor there.

Realizing he couldn't escape his desire to be a superhero, Ben Reilly created his Scarlet Spider suit from an all red bodysuit and a hoodie he stole from a nearby market. He also ripped out the hoodie's sleeves. His suit included a utility belt and Web-Shooters.[1]

The members of the 50-State Initiative's Scarlet Spiders were given copies of the Iron Spider Armor with an extra waldoe.[2]

After stealing the Spidey Stealth Suit, Kaine Parker realized that Madame Web had changed the suit's design to be similar to Ben Reilly's suit. The new look gave Kaine the nickname Scarlet Spider.[3]

Years later, Ben returned to the role of Scarlet Spider, initially using a costume he stole from a Spider-Man cosplayer.[4] After saving a group of Spider-Man inspired vigilanties called the Web Spinners, the Web Spinner dressed in a replica of his original costume criticized his current attire, for which Ben forced him to give him his suit.[5]

Retrieved from "https://marvel.fandom.com/wiki/Scarlet_Spider%27s_Suit?oldid=6031258"
Community content is available under CC-BY-SA unless otherwise noted.