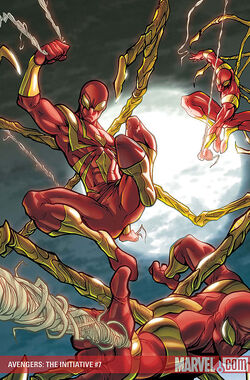 Origin
A trio of MVP clones given duplicates of the Iron-Spider costume.

The Scarlet Spiders were three clones of the seemingly-deceased Initiative recruit, MVP, named Michael, Van, and Patrick. All three of them wore the 'Iron Spider' Stark armor which Spider-Man formerly wore pre-Civil War and during the event. Originally, they identified themselves as "Red Team" on the field. They may have been the intended successors to the Spider-Man identity once Peter Parker's powers would be removed permanently.

They took down the Sinister Syndicate consisting of Shocker, Boomerang, and Hydro-Man.[1]

When Blitzschlag was visiting New York City after the events of World War Hulk, he was attacked by a group of Vulturions, who stole the plans for a gamma bomb he was carrying. Coming to his aid, the Scarlet Spiders pursued the Vulturions until being attacked by Peter Parker, angry over Stark's use of other Spider-Men. Taking one of the members out, he was eventually convinced by a second to help them against the Vulturions. Arriving in time to help Van, the two Scarlet Spiders utilized a cloaking technology built into their suits to make them appear to be differently-costumed versions of Spider-Man, distracting the newest Vulturions while Peter Parker took down the original member, Honcho. Thankful for his help, the Scarlet Spiders went against orders, and instead of capturing Parker, they made it appear as if he had been a member of the team, throwing doubt on whether he was ever actually Spider-Man.

A formerly deceased clone of MVP acquired a top secret weapon known as the Tactigon and began referring to himself as KIA (killed in action). Insane, and greatly influenced by the alien technology, he began systematically hunting down all members of the Initiative whom he felt was responsible for his condition. During the attack, he decapitated one of the three Scarlet Spiders, Van, after they unmasked themselves in an attempt to calm KIA.[3] The surviving Scarlet Spiders, Michael and Patrick, make their way to Bulls Gap, Tennessee to aid in the capture of KIA.

After the defeat of KIA, the surviving Scarlet Spiders, along with the MVP clone who replaced the original MVP to fool his parents, and the real MVP's father, joined with Justice's New Warriors as a Counter Initiative/Counter Force of underground registered heroes.

Following the Skrull invasion, Counter Force were made wanted criminals when Norman Osborn began taking control of the 50-State Initiative. The team showed up at Camp Hammond, having retaken the name New Warriors, to battle a rampaging clone of Thor, Ragnarok, but with the cost of losing Scarlet Spider Michael.[4] In the aftermath of the battle, Patrick, the last surviving Scarlet Spider, publicly unmasked himself, revealing to the media that the Initiative had secretly cloned MVP.[5]

Equipment: * Waldoes: The Iron Spider Armor possesses four mechanical spider-arms, or "waldoes," that can be used to see around corners (via cameras in the tips) and to manipulate objects indirectly. Stark describes them as too delicate to use in combat, yet they have used to smash through the sensors in the Titanium Man's helmet.

Retrieved from "https://marvel.fandom.com/wiki/Scarlet_Spiders_(Earth-616)?oldid=3496808"
Community content is available under CC-BY-SA unless otherwise noted.