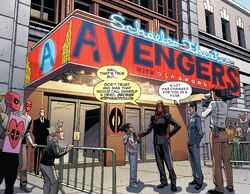 The Schaefer Theater was a previously-abandoned locale near 59th Street and Palm Street in Manhattan.[1] It was acquired by Deadpool to serve as the headquarters of the Avengers Unity Division, as well as his new base of operations for himself and that of the Mercs for Money, and as a retail market for various merchandise sold to help fund the Avengers.[2]

The Schaefer Theater was heavy damaged by Ultron upon his return to Earth when he was confronted by Cable after Wasp determined he was not really Hank Pym.[3] Even though the threater underwent an extensive reconstruction,[4] Deadpool himself would eventually burn it down as part of his attempt to turn his back on the life he had built.[5] What remained of the building was later torn down by Leo Cross Demolition.[6]

On Earth-TRN664, the Schaefer Theater became rundown after Deadpool was brainwashed, resulting him neglecting to maintain the theater's condition. He abandoned the base when he was dispatched to Euboea. Later, a group of superheroes broke into the theater to investigate the murders Wade had committed, finding files on his victims and a message he wrote in cheese wax reading: "Help me."[7]

Like this? Let us know!
Retrieved from "https://marvel.fandom.com/wiki/Schaefer_Theater?oldid=6473859"
Community content is available under CC-BY-SA unless otherwise noted.