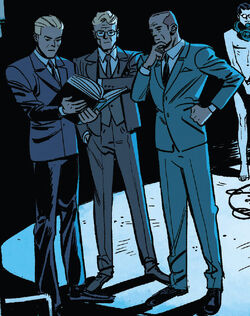 1500 years ago in Britain, a guild of warlocks and magic users plotted to overthrow King Arthur and give power back to the common people. To achieve their goals, the guild harnessed the power of the spirit of Eternity to create the Eternity Mask, a mystical mask that makes its wearer the equal of their opponent. The Black Knight was dispatched to locate the guild's hideout where he encountered their champion, who was wearing the mask. After three straight days of fighting, the Black Knight finally killed his adversary. The guild retreated, taking the mask with them. The Mask would survive into the modern day, passing through many hands and influencing key events in human history.[2]

The guild was still active in the 19th century and apparently looking for the Eternity Mask but on his deathbed The Masked Raider told Dr. Matt Masters not to let them get to it.[3]

By the late 1930s, the guild was known as the Scientists' Guild and it consisted of three members: Dr. Carlo Zota, Dr. Jerome Hamilton, and Dr. Maris Morlack. The Guild came to regard themselves as representing the next stage of humanity and were determined to shape or create the next generation of mankind.[4]

The three scientists had a meeting with Professor Phineas Horton where he revealed his creation, the synthozoid Human Torch, at the 1939 World's Fair. The Guild thought that this new invention was too dangerous and that it should be destroyed. This demand, along with public outcry and presidential order,[5] convinced Professor Horton to bury the Torch in a concrete block.[6] Later, Professor Horton himself was accepted as a member of the Scientists Guild.[7]

Under the alias Three X, the Guild also acted as private investigators specializing in cases of a super-scientific nature. In their only known case, they were hired to find the mysterious kidnapper known as the Green Terror. While examining the clues left behind during the most recent kidnapping, the Three Xs were attacked by the Green Terror's men. This did not stop them from learning that the Green Terror's men were stationed aboard a ship that was about to leave New York harbor. Rushing to the scene, they were captured. However, they met with the Green Terror and learned that he kidnapped his young victims to drain their blood so that he could maintain his youth.

The Three Xs broke free and easily defeated the Green Terror and his men in a fight, taking control of the ship and returning it to New York so that the Green Terror could face punishment for his crimes.[8]

In 1940 the Scientists Guild, under their Three Xs alias, acquired the Eternity Mask from its then current owner Leslie Lenrow, a private detective also known as the Ferret.[4] Using the mask and a tome of arcane magic, the Guild launched Project: Thunderer, and turned radio operator Jerry Carstairs into a superhero known as the Thunderer in 1941. The creation of the Thunderer was secretly witnessed by Steve Rogers prior being injected with Super-Soldier Serum.[9]

At a science conference Zota, Hamilton, and Morlak met geneticist Wladyslav Shinski, who would later join the Guild and administer longevity treatments to his comrades, which kept them youthful for decades.[10][11]

In 1946, the Guild funded Professor Horton's creation of Adam II, which Horton hoped would be an improvement on the Human Torch. In exchange for funding, the Guild was allowed to supply their own programming. The Guild's ideas of the next stage of mankind caused Adam II to develop feelings of superiority towards the human race. The rouge synthezoid was eventually defeated by the All-Winners Squad, but not before he killed William Nasland, the second Captain America. Disgusted by their recklessness, the Thunderer quit the Scientists Guild, vowing to take them down if they ever came after him or the mask.[12] The Guild eventually caught up with Thunderer sometime prior to 1956 and killed him, taking the mask and leaving his body in a cave.[13]

By 1958 the Guild's experiments with the Eternity Mask were unsuccessful as it didn't make any of them each other's equal. Dr. Hamilton suggested it was because they wished to rule the world but Dr. Zota disagreed, as their goal was not to rule it, but to save it. Dr. Shinski reasoned that the world should be controlled, but by a race of perfect humans. Shinski stated that they too would have to evolve. He then unveiled a sketch of a human sized cocoon and declared the Scientists Guild was dead. From that point on they would be known as the Enclave.[11]

The Three X's were reformed years later by Jimmy Woo (who had been investigating the Eternity Mask along with Bobby Da Costa and the Agents of Atlas),[14] Blue Marvel, and the recently returned Night Thrasher. They began investigating a man going around dressed as The Masked Raider who they believed was the masks current owner. They also joined a bunch of superheroes in solving the murder of Kree general Bel-Dann.[15]

Retelling of Human Torch's origin in Marvel Mystery Comics #92 seems to imply that the Scientists' Guild was also called as the Academy of Science. However, because both are mentioned in the Saga of the Original Human Torch, the organizations are assumed to be different ones.

Like this? Let us know!
Retrieved from "https://marvel.fandom.com/wiki/Scientists_Guild_(Earth-616)?oldid=5765498"
Community content is available under CC-BY-SA unless otherwise noted.