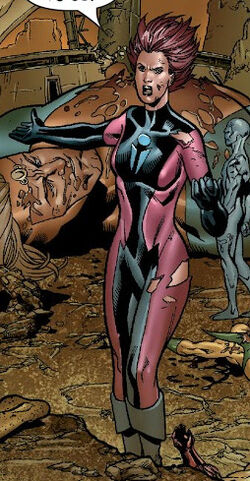 Scintilla is a member of the Imperial Guard, a multi-ethnic group of super-powered beings who act as enforcers of the laws of the Shi'ar Empire. Under her original Guardsman name of Midget, she was among the first of the Imperial Guard encountered by the team of superhuman mutant adventurers known as the X-Men who sought to rescue the Princess-Majestrix Lilandra from her insane brother, then-Majestor D'Ken. Following the orders of their emperor, the Guard clashed with the X-Men and were on the verge of winning when the band of interstellar freebooters known as the Starjammers arrived to turn the tide of battle in the X-Men's favor.[1]

Later, after the formerly exiled Deathbird had usurped the Shi'ar throne from her sister, Lilandra, Midget was amongst those Imperial Guard members who clashed with the British team Excalibur and the team of interstellar freebooters known as the Starjammers over the fate of the then-bearer of the cosmic Phoenix Force, Rachel Summers.[2]

During the war between the Shi'ar and Kree Empires, Midget - now using her new Guardsman codename of Scintilla - worked with Nightside to rescue Warstar and several Shi'ar soldiers from Avengers custody.[3]

Scintilla was one of the survivors of Vulcan's attack on the Imperial Guard. She openly questioned Gladiator's decision to take the human alive after he was finally defeated.[4]

Scintilla is a member of an unidentified alien race who possess the ability to shrink down to microscopic size. Scintilla can reduce her size to at least 1/20 of her normal stature, but can quite possibly shrink even smaller.[5] She can also choose whether her body's density becomes relative to her diminutive size or retains the density she possesses at full height. If the latter, Scintilla's strength and durability become proportionately augmented.

Scintilla has also previously wielded a device which allowed her to channel her size-changing abilities into a beam of energy that she could fire at another being, thus altering their height.

Like this? Let us know!
Retrieved from "https://marvel.fandom.com/wiki/Scintilla_(Earth-616)?oldid=5722512"
Community content is available under CC-BY-SA unless otherwise noted.