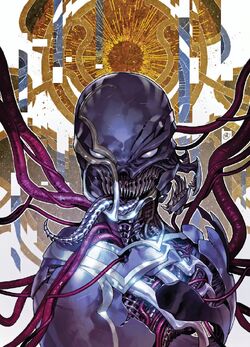 When the Carnage Symbiote was taken back to Earth from its orbit after the prison break in the Raft, Michael Hall used the symbiote to create hybrid prostheses consisting of both technology and the symbiote itself. Eventually, the Carnage symbiote managed to escape its containment cell and bonded to Tanis Nieves, leaving its offspring within her prosthesis after it used her to rescue Cletus Kasady. This new symbiote was later taken from Nieves by Shriek.[1]

When Nieves was taken hostage by Shriek, she managed to get near the new symbiote and become one with it, creating Scorn. Scorn forced Shriek to use her sonic attack to weaken Carnage.[2] Later, she joined forces with the Mercury Team to stop Carnage from taking over Doverton, Colorado.[3]

The Scorn symbiote was presumably affected by the awakening of the dark elder god Knull, who had created the symbiotes and attempted to use them to conquer the universe and purge it of life.[4] The symbiote and its host became the leader of an apocalyptic cult worshipping of Knull and dedicated to freeing him from his prison; and to this end retrieved the corpse of Cletus Kasady - who the cult viewed as Knull's prophet, and stole a sample of the Grendel symbiote - which Knull had indwelled - from the Maker. Scorn bonded the sample of the Grendel symbiote to Cletus' body, resurrecting him in the hopes that Knull would use him as a vessel;[5] but when Cletus and Knull struggled for control over their shared body Tanis offered to undergo surgery to extract the trace remnants of the Carnage symbiote - its "codex" - to make him whole. Instead, the Grendel-controlled Cletus ripped out Tanis' spine and devoured it; seemingly killing her and leaving her symbiote's fate unknown.[6]

The Scorn symbiote gives to its host the following powers:

Like this? Let us know!
Retrieved from "https://marvel.fandom.com/wiki/Scorn_(Klyntar)_(Earth-616)?oldid=5754271"
Community content is available under CC-BY-SA unless otherwise noted.