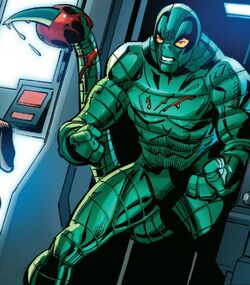 As the Scorpion, Mac Gargan wore a full-body battle suit, which had undergone several major revisions in his long criminal career. These were always courtesy of third party suppliers - since Gargan himself possesses no aptitude for engineering. Dr. Farley Stillwell created his original suit, with funding provided by J. Jonah Jameson.[1]

Later versions were provided by Justin Hammer, and other large corporations and governments seeking to maximize the lethality of their hired assassin. The most recent design consisted of an inner woven Kevlar layer, covered with a thick layer of insulation/padding, and topped with a high-tech composite armor plating, making him impervious to small firearms.[citation needed]

The Scorpion's battle suit was originally equipped with a powerful tail that he could whip at speeds up to over 90 miles per hour. The tail varied in length with each design - from an original 4' version, up to 20' in other implementations. His most recent tail before gaining the Venom symbiote was approximately 10' in length. His tail was powered by a self-contained power pack mounted on the back of his battle suit. The tail was connected via a cybernetic link to the fine muscles of his spinal column when he dons his suit, enabling him to direct the tail by involuntary nerve impulses and activated by his mental commands. Internally, the tail consisted of a series of separated circular plates connected by a matrix of steel cables. Solenoids contract the cables and manipulate the tail, allowing it to whip at speeds of over 150 feet per second. The tail was also armored, and was tipped with a spike, making it deadly in combat. He had mastered the use of his tail to the point that he could use it as both a bludgeon, projectile launcher, or as a fifth limb (he had also upgraded its flexibility several times, making it much more efficient in combat). By coiling his tail behind him and using it as a spring, the Scorpion could propel himself over thirty feet into the air.[2]

Over the years, he had modified and enhanced it countless times, acquiring upgrades from the likes of Justin Hammer and the Tinkerer, who equipped it with a poisonous barb with venom installed or a form of hypnogen, electrical blasts (he could also channel electricity through it to shock anyone who tried to grab him by the tail or short-circuit electrical equipment), laser blasts, acid blasts, and mace gas.[3][4]

Alistair Smythe's enhancements on the Scorpion's gloves gave him pincers on each hand.[5]

When the Scorpion was employed by Justin Hammer, Mac Gargan's eye holes were covered by a transparent membrane rigged to dissolve Spider-Man's webbing, should Spider-Man try to blind him as he did in past battles. It is unclear if his later costumes retained this.[6]

Like this? Let us know!
Retrieved from "https://marvel.fandom.com/wiki/Scorpion%27s_Suit?oldid=6432012"
Community content is available under CC-BY-SA unless otherwise noted.