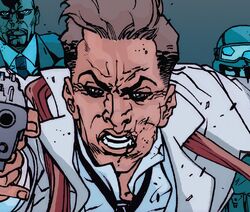 Scott Dakei was a major newspaper publisher and network owner whose ultra conservative anti-mutant views have put him in a paranoid state to the point where he has hidden himself and his daughter Georgia along with bodyguards in a impenetrable fortress he has dubbed the Bunker in New Mexico.

He came to the attention of X-Factor when his daughter released a live feed by computer about being trapped within the compound and not being able to experience life, high school, things normal teenagers deal with on a daily basis. Dakei caught her doing the feed and had his bodyguard shoot the computer monitor with a gun.

X-Factor arrived at Dakei's front door in their civilian disguise to investigate the incident, but Danger made things worse by stating to Dakei's security system that they were X-Factor, a group of mutants, which they got a negative response with multiple machine guns shooting at them which apparently killed them.

Dakei and his bodyguard then came outside to notice the bodies until they all of a sudden disappeared, which was actually Danger using her hard light images to create holograms for a distraction so they could sneak into the place. Dakei, along with a group of men head to his daughter's room to engage them only to witness the body of Cypher laid out on the ground.[1]

Like this? Let us know!
Retrieved from "https://marvel.fandom.com/wiki/Scott_Dakei_(Earth-616)?oldid=5675026"
Community content is available under CC-BY-SA unless otherwise noted.