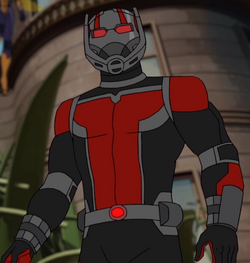 Scott Lang was once an an outlaw who would steal from others and sell the technology he made to criminals. That is until he took on the mantle of the Ant-Man after Dr. Hank Pym, thus beginning his superhero career.

Scott Lang aka Ant-Man worked with Iron Man and Falcon to stop the unstable Pym Particles from getting out of Avengers Tower at the time when Falcon's mother Darlene came to visit her son.[1]

Upon hearing what happened to Stark Tower during the fight with Ultron, Ant-Man allowed Iron Man, Hawkeye, and Thor to use his lab within an anthill. Ant-Man helped them out to battle M.O.D.O.C. when he used stolen Pym Particles to grow out of his cybernetics and prevent himself from being taken over by Ultron. With advice from Ant-Man, Iron Man was able to remove the Pym Particles from M.O.D.O.C.'s body. The villain was subsequently left tied up for S.H.I.E.L.D.

Ant-Man joined up with Iron Man so there could be another genius for the Avengers.[2]

When Nick Fury was controlled by Doctor Octopus nanobots, Lang and Spider-Man shrunk down and went inside Fury's body to bring him back.[3]

Seemingly those of Ant-Man of Earth-616.

Like this? Let us know!
Retrieved from "https://marvel.fandom.com/wiki/Scott_Lang_(Earth-12041)?oldid=5852817"
Community content is available under CC-BY-SA unless otherwise noted.