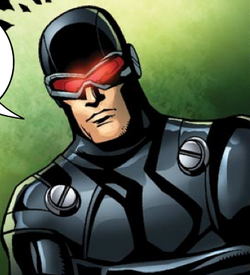 As a younger man, Scott Summers and the other members of Shadow X were taken in by Professor X and had their wills broken and turned into killers for their new master. Professor X and Shadow X killed all of the other paranormal beings in their native reality before coming to Earth-616 as a result of M-day. [4]

The members of Shadow X battled the super empowered group New Excalibur and were eventually defeated by them. Shadow X was sent to prison.

Later, they allied with New Excalibur to save the city from Albion and to get revenge against him. However, the Shadow X team was killed by Albion's forces[2].

Optic Blast: Dark Cyclops possesses the mutant ability to project a powerful beam of concussive, ruby-colored force from his eyes.

Like this? Let us know!
Retrieved from "https://marvel.fandom.com/wiki/Scott_Summers_(Earth-6141)?oldid=5287418"
Community content is available under CC-BY-SA unless otherwise noted.