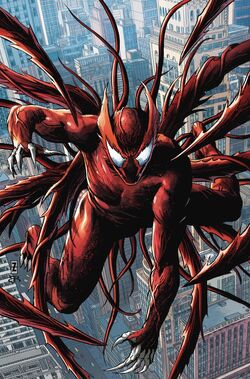 After Justice had killed his abusive father in an act of rage, he turned himself in and was put on trial. He was surrounded and led around by a series of armored Vault guards, one of them being Scott Washington.[1] Justice was acquitted of murder, but found guilty of negligent homicide. He allowed himself to be taken in. The Guardsmen (including Scott) regularly trained against Justice throughout his incarceration, which was highly beneficial for the guards since they would never have attempted to train with the supervillain prisoners. Out of all the Guardsmen, Scott became closest to Justice.[2] The New Warriors soon tried to spring Justice, but he sent them away due to his respect for the law.

Scott and Justice continued sparring against each other, however despite their improvement Justice still easily dispatched his captors on a regular basis. A Vault prison riot broke out after one such sparring session and Justice ended the fighting on both sides by suggesting compromise. He used his friendship with Scott to show that the guards and prisoners were only numbers if they allowed it and that each side needed to understand the other more.[3]

Scott was given a special assignment for a couple months. Dressed in his Guardsman armor, he his fellow guards were to live underground and oversee a scientist's experiment on the four symbiotes created by the Life Foundation. Scott knew that Venom and Carnage were psychotic killers and that the symbiotes tried to corrupt their earlier hosts, so he was apathetic to their situation. He was promised to get a raise afterward was the best way of getting his mother and brother Derek out of the ghetto. At that exact same time, the invasion of the Symbiotes was taking place in New York, so the scientists treated the symbiotes harshly and quickly with each successive experiment in order to find a solution to ending said invasion. The Venom symbiote unleashed a sonic shriek of despair during Scott's assignment, which caused most symbiotes in the city to commit mass suicide. Instead of dying, the Life Foundation symbiotes broke their restraints and huddled together, each one incredibly weakened from the shriek and experimentation. The four aliens began merging and became, as Scott stated, a Hybrid.

The composite symbiote broke out and momentarily latched onto Scott. His fellow Guardsmen scared it off with sonic blasts, but Scott and the Hybrid symbiotes shared minds for a brief moment. Scott took off his helmet to show that he was shedding tears, and insisted to the others that the symbiotes didn’t deserve all of their torture. Scott's friends told him to go get checked out as they left after the escaped alien. He saw the merged symbiote above him, paused, and allowed it to escape, which got him into heavy heat with his superiors. Cameras surrounding the area recorded his actions, and coupled with the fact that Scott didn’t even tell anyone he saw the creature dug him into more trouble. In an attempt to defend his actions (and the symbiotes) by stating that what they were performing on the aliens was wrong, Scott lost his job.

In the shadows, feeling Scott's desperation, the Hybrid symbiote felt that it needed a host and that Scott, the "kind one," needed them just as much.

As time passed Scott has obtained a job as a low-paid security guard thanks to the government having blacklisted him. He had been drawing up the blueprints for his old Guardsman armor in hopes of maybe being able to exploit it in some legal way for money. He makes sure that his brother Derek doesn’t stray into running with gangs, but this ultimately lead to Derek standing up to a high-ranking gang member at a basketball court. Scott protected his brother by nearly breaking the guy’s arm. The thug (Scar) ran off, saying that he’d get his revenge.

One night he broke into their apartment with his friends and shot both Scott and his brother Derek. Derek was killed and Scott was left paralyzed. Weeks later, Justice gave him a visit, but Scott was a changed man. He became filled with frustration and anger over what happened to him. When he went home he heard a kid driving by turning up his stereo, and initially thought it was the thugs out to finish the job. Far from his assumption, the noise was actually the composite symbiote, who searched for Scott in his time of need.

At first Scott tried to fight the bonding, but then realized that he could use them for his own ends. The symbiotes noticed that he'd become different; not due of his legs no longer functioning, but rather the Scott now wasn’t the same kind soul they remembered. Now as their host, Scott wanted revenge which did not bode well with the symbiotes.

Hybrid took to the streets and terrorized the gang activity in Brooklyn. He tracked down one man whom he recalled as an accomplice of the gang that crippled him. He tried to kill him, but the symbiotes left him, insisting that they would not take a life. Scott was completely vulnerable, since he could not walk, so the symbiote chose to rejoin him so they could save him from the gang member’s gunfire. Scott attempted once more to convince the symbiotes that killing was the right thing to do, but he was stopped by Justice.

Justice deduced Scott's secret identity as Hybrid and was out to stop him from becoming a cold-blooded murderer. Hybrid explained himself: The gang he was chasing stole his Guardsman armor blueprints and he needed to stop them before they could do anything dangerous with such knowledge. To find their hideout, he revealed one of the symbiote's unique abilities. Injecting people with a piece of the symbiote's material, Hybrid could then track it like a Spider-Tracer, and he used that ability on the same man he nearly killed.

Revenge on the Eazy X Gang

Hybrid and Justice sneaked into the gang headquarters and just as Hybrid seemed to have control over himself he sees the man that crippled him and snapped again. Justice would love to stop him but as it turned out, the gang did put Scott’s blueprints to use. As Justice contended with the armored criminals, Hybrid chased after his brother’s murderer. He found a gang member hiding his face with a mask, so he slammed him into a wall and tore the mask off. The mystery thug was Dwight: Derek’s best friend.

He explained that out of fear from Derek and Scott's assault, the safest option was to join the Eazy X Gang so he wouldn't be targeted. Scott tells off Dwight about their neighborhood's crime problems, simultaneously using his symbiote tendrils to disarm his enemies. His point was that the true root of their community’s problems was the lack of respect they all had for their fellow man. Their gang activity, drug running and staking territory was only making things worse, and Hybrid even vocally denounced his thirst for revenge, seeing as it was counter-productive. The gang members ignored his message and shot at him before running off. Telling Justice not to go after them, Hybrid fell to his knees, hopeless about the entire situation. He told Justice that this is an enemy they just can’t deal with. Dwight, having removed his gang apparel and offering his gun, felt differently. Scott’s ability to change his mind and let go of his anger in the name of hope had inspired him to do the same. Justice felt that if Hybrid could do that for one person, he could probably duplicate the result in others.

Hybrid and Dwight looked over Derek’s grave, and Scott reminisces that he always promised Derek that he’d lead him out of their awful neighborhood, but as of recent events, Derek was never going to leave. He and Dwight discussed making their neighborhood a better place. Turning into Hybrid, Scott stated that they had a lot of work to do.

Crime went down roughly in half since Scott began his vigilante career. Hybrid noticed Sentry and thought that the government began hunting him down alongside Guardsmen from the Vault. Scott started planning how he’d have to hide from his would-be captors, however the usually peaceful symbiotes went into a rage. The rest of the Jury appeared and took out Hybrid with their sonic weapons. Hybrid sent some of his symbiote material out the window during his fight, which found Dwight and warned him of his plight. Dwight immediately called the the emergency number for the New Warriors, and Justice eventually arrived with Powerhouse and Turbo. The symbiote material latched onto Turbo and fed the coordinates of Scott's location to her armor using binary code.

At the Jury headquarters, Olivia Lentz planned to charge the symbiotes as the scapegoat for the symbiote invasion. In order to separate Scott from his symbiote, they had to use sonics which was more than likely going to kill all five of them. At Olivia's behest they commenced the separation. Maxwell Taylor barged in and demanded she stop the separation, saying that she was not allowed. Hybrid's mask peels back and the Jury saw Scott’s face, a couple of them recognizing him. Olivia reluctantly stopped trying to kill him, but kept him imprisoned.

Sentry attempted to free Hybrid, only for the symbiotes to grab him in another ploy for revenge. Eventually chaos erupts as the Guardsmen and New Warriors fight to protect Scott (the one who needs to be stopped.) Maxwell intervened and managed to calm everyone down so they could deal with the situation. Focusing on the good memories shared with Sentry, Scott convinced the symbiotes to set him free. Justice aided him in convincing the Jury that he was no longer a threat. Afterward Justice offered a position on the team, but Scott decided to work on his own neighborhood first, with Justice leaving the option available for the future.

After the Civil War, he was listed as a potential recruit for the Initiative.[4]

When Eddie Brock started his hunt for symbiotes, he first targeted Hybrid. While Washington was patrolling the streets of his neighborhood, Brock paralyzed him with an electric discharge. A confused Hybrid asked why Brock was attacking him, and although he knew Scott was a hero, Brock shot and killed him.[5] The rests of Hybrid may have been found by the U.S. Army, who separated it into the original four symbiotes and bonded them to each one of the Mercury Team in order to fight Carnage.[6]

As a result of physically bonding with the composite Symbiotes, Washington possesses various superhuman attributes similar to Peter Parker and Eddie Brock (Venom).

Like this? Let us know!
Retrieved from "https://marvel.fandom.com/wiki/Scott_Washington_(Earth-616)?oldid=6133870"
Community content is available under CC-BY-SA unless otherwise noted.