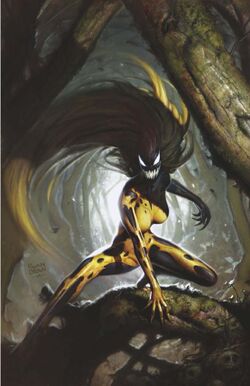 The sinister Life Foundation a organization that was preparing for the M.A.D. (Mutually Assured Destruction) fallout of the Cold War or in the event of world chaos, sought to provide a comfortable life for their wealthy clients after the impending holocaust. Needing a superhuman police force to protect this Utopian future, the Foundation's leader Carlton Drake seeing these futures guardians in the unborn offspring of Venom had him captured.[1]

Once the Foundation captured Venom who was in San Francisco at the time, they brought him to their lab in Mojave Desert California. There through a procedure they forcible extracted five “seeds” from Venom and hatched them. Too young to control the symbiote was merged with Donna Diego, codenamed Strike Agent Four, a mercenary suffering from schizophrenia. Together she and her host Donna along with the other four would become the Foundations Guardian Symbiotes.[2][3]

While its host tested her new powers, Donna attacked a mall in Salinas, California. She encountered Spider-Man, who was looking for Eddie Brock and fled back to the Life Foundation's base in the Mojave Desert. When Spider-Man followed Strike Agent Four, she and the other Guardian Symbiotes attacked the wall crawler.[4] But before they could kill him Eddie who had gotten free once they removed the Venom symbiote, appeared. But in order to beat them Eddie became Venom once again, and with Spider-Man defeated her and the others using a metabolic accelerator, aging the symbiotes turning them into dust and seemingly killing them when Venom turned up the power. Her host as well as the other symbiotes also appeared to die in the ensuing explosion.[5]

However, thanks to the efforts of the Life Foundation, they survived. As she and her fellow symbiote siblings began attempting to compel their hosts to violence, Donna and the other mercenaries left the Life Foundation and searched for Eddie Brock, the host of the Venom symbiote, hoping he would help them control their symbiotes. Eddie, dismissing them as lost causes who would turn out as bad as Carnage, refused to aid them.

With her host still fighting for control they joined the rest of the former Guardian Symbiotes in Donna's third attempt in getting Brock to help. Together they broke Brock, who Venom symbiote was elsewhere, and a reporter pretending to be a doctor Ellis out of a New Mexico facility and brought them to an abandoned factory in a small city near Chicago to make him help them.[8][9]

Unfortunately yet again Brock refused, further pushing her host Donna to succumb to her schizophrenia again. But this time she hosts believing all symbiotes are evil would secretly turn on its siblings. When Brock and Ellis managed to escape, the host under her psychosis used a sonic blade Donna acquired and killed the symbiotes "sister" and its host Leslie Gesneria. Later, when Leslie's body was found, the others believed it was Eddie Brock who killed her wanted to make him pay.[10]

Hernandez tried to help Donna get control of the symbiote but realized too late that Donna was mentally unstable, Donna killed the symbiotes last sibling and his host. Turning the sonic blade on Brock she attacked, but the Venom symbiote, who had been looking for Brock, rejoined with him and they easily beat her. After Venom escaped the Federal Agents that had been tracking the Venom symbiote, she and the others were contained, revealing that the symbiotes had survived though their hosts did not.[12][11]

Later, through unrevealed circumstances they managed to escape the Federal Agents, leaving her symbiote "siblings" behind.

Following an Invasion of Symbiotes, a large number of New Yorkers had been taken over by symbiotes, and some had even managed to retain them even after the supposed mass-suicide of the invaders.[13][14][15][16] When its host regained a hold on her sanity, Donna took control, or at least reached a modus Vivendi with it. To make up for her past behavior, she began seeking out other symbiote and helping their human hosts to cope.[17]

When another of those she was helping and their symbiotes turned up dead, the sixth in three weeks, she believed the reports by the NYPD that the brain-eating serial killer was Venom. Thinking her apartment was the safest place she left Zeena Hodges, another of those struggling with their symbiote, to find others that needed their help. The next day, she returned with another refugee of the symbiote invasion, George, they found police had blocked off the building. When the police left to chase down Venom they went to investigate, going through her personal things she got tired of George's constant badgering and a fight broke out. As she gained the upper hand on George she noticed an ugly piece of furniture that wasn't her's, it suddenly transformed revealing itself to be a Xenophage.[17][18]

The Xenophage, a predator of the symbiotes who was attracted to Earth by their invasion, was the real killer of Zeena, and the other refugees Donna was trying to help. It attacked them, eating George's and his symbiotes brains, it paralyzed her with its Paralytic Saliva which the weight of the out cold symbiote kept Donna from moving as well. Keeping her for later, the Xenophage turned back into dining hutch concealing Donna within itself as it waited for its main course, Venom and Eddie Brock. When the NYPD surrounded Venom outside Donna's building, the Xenophage revealed itself and using its symbiote paralytic saliva on Venom too.[17][18]

Though the symbiote briefly came to, allowing Donna to fight back, the Xenophage sprayed her again and escaped from the pursuing police with the two paralyzed symbiotes and their host by slipping into a subway tunnel. Eddie tried to fight back, but the Xenophage was simply too strong for him. A group of skateboarders that had befriended Eddie tried to help, but the Xenophage simply looked forward to dining on them as well, likening them to veal. Horrified, having come to again Donna joined Eddie in fighting off the alien to keep it away from the kids. As the subway train they were on barreled past its station, an over-zealous officer tried to throw a white phosphorous grenade at Venom. The Venom symbiote come to and Eddie used it to pocket the grenade before it went off. However, as the Xenophage was about to eat her and Donna, Eddie tricked the Xenophage into eating it by hiding the grenade in an extension of his symbiote shaped like his head. The grenade went off, and the Xenophage exploded into a fiery inferno, leaving it a charred and noxious mess on top of the subway train.[19]

It Had To Happen

The Scream symbiote was ultimately killed alongside Donna by Eddie Brock, who incapacitated it with sonic feedback and stabbed her to death with a heated knife.[20]

Years later, Scream was resurrected by Knull, still bonded to Donna's corpse. When Patricia Robertson - a soldier who had formerly hosted a clone of the Venom symbiote - attacked it, Scream abandoned Donna's skeleton and bonded to her. Initially having assimilated Donna's personality and mental voices, Scream succumbed to Knull's control and attacked Andi Benton, who it recognized its host bore a grudge against for having bonded to and lost the cloned symbiote.[21] Patricia's strong will helped the Scream symbiote resist Knull's control, but it succumbed again when attacked by Carnage.[22] Persuading the Scream symbiote to resist Knull's control a second time, Patricia sacrificed herself in an attempt to save Andi's life, and the Scream symbiote left her corpse and bonded to Andi.[23]

Unlike Andi's amicable relationship with her previous symbiote, she came to loathe being bonded to the Scream symbiote, trying to shut it out of her mind and demanding that it abandon her like everyone else had. Despite Andi lashing out at it in her despair and anger, the Scream symbiote protected her whenever she was attacked, and helped her in hunting would-be rapists. When Andi attempted to commit suicide, the Scream symbiote regained its voice and saved her, though their subsequent argument was interrupted when Andi was attacked by Lovecraftian monsters. Taking over, Scream noted that the creatures were formed from drowned corpses fused to sea life and reanimated by living abyss, and scornfully killed them before telling the traumatized Andi that it would keep her safe. Following Andi angrily telling it that it was endangering her, the Scream symbiote fell silent for several days, only breaking its silence to desperately beg Andi not to listen to a woman claiming to be her mother.[24]

The Scream symbiote gives to its host the following powers:

Like this? Let us know!
Retrieved from "https://marvel.fandom.com/wiki/Scream_(Klyntar)_(Earth-616)?oldid=6417034"
Community content is available under CC-BY-SA unless otherwise noted.