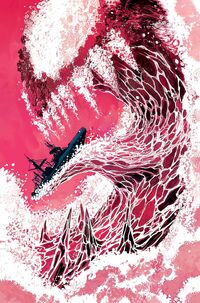 Hunting down occult dealers Roger Felwood, Jr. and Roger Felwood, Sr., Carnage tortures them for more information on the Darkhold and the cult that reveres it - being told to seek out Brother Gregori in Jakarta - before using them as test subjects for his new powers.

Scapegoated for the disastrous failure of her assignment to hunt down Carnage - which resulted in the deaths of eighteen FBI agents - Claire Dixon is put on probation and the Anti-Symbiote Task Force is disbanded. Immediately afterwards she is approached by Victoria Montesi - an occult-hunter who had crossed paths with the Cult of the Darkhold on numerous occasions. Montesi offers to bankroll the Task Force and help them catch Carnage in exchange for retrieving the Darkhold; and the two re-recruit Manny Calderon and John Jameson before springing Eddie Brock from a secret holding facility.[1]

Arriving in Jakarta, Carnage is confronted by the Darkhold Dwarf - who warns him about the risks of using the Darkhold. Undeterred, Carnage seeks out the Cult of the Darkhold and is briefly captured by Brother Gregori. Learning that the cult intends to take him to another Chthonic Temple on a secret island hidden in the Timor Sea, Carnage breaks free, takes Brother Gregori hostage, and hijacks a freighter called the Caspian Sea to sail there.

En route to Jakarta, Victoria Montesi informs the members of the Anti-Symbiote Task Force about the Darkhold and its connection to ancient eldritch gods like Chthon; though Eddie - a devout Catholic - dismisses it as blasphemy. Montesi warns them that if Carnage unleashes Chthon, it would mean the end of the world. However, the task force arrives too late to stop Carnage from hijacking the Caspian Sea and set out to follow him in a yacht.[2]

Continuing to hone his new powers, Carnage turns the crew of the Caspian Sea into Human-Symbiote hybrids. Infiltrating the ship during a storm, the Task Force fights off Carnage's minions and rigs the ship to explode;[3] though Dixon is captured by Carnage,[3] who uses the Darkhold to induce the Carnage symbiote to spawn the Raze symbiote and bonds it to her. Enslaved by Carnage, Raze attacks her former allies, who blow up the ship with her and Carnage still on it.[4] Raze survives and stows away on the yacht;[3] while Carnage is discovered by a South African girl named Jubulile van Scotter, who rescues him not knowing who she is. Carnage repays her kindness by infecting her with an offshoot of his symbiote before she explodes her sailboat in an attempt to kill him.

Recovered by the task force,[5] Jubulilie - psychically connected to Kasady through her symbiote - informs them that Carnage and Raze are still alive and that the former has reached the island.[4]

Retrieved from "https://marvel.fandom.com/wiki/Sea_Devil?oldid=6453188"
Community content is available under CC-BY-SA unless otherwise noted.