Seagate Federal Penitentiary[2] was a maximum security prison off the coast of Georgia.[1]

Luke Cage was taken to Seagate Prison to serve his sentence. He was consumed by rage over Stryker's betrayal and his father's supposed death, engaging in frequent brawls and escape attempts. He became the favorite target of sadistic guard Albert "Billy Bob" Rackham, whose brutality ultimately led to a demotion that he blamed on Lucas. Later, research scientist Dr. Noah Burstein recruited Lucas as a volunteer for experimental cell regeneration based on a variant of the Super-Soldier process he had previously used to empower Warhawk.[3]

Burstein immersed Lucas in an electrical field conducted by an organic chemical compound; when he left Lucas unattended, Rackham misused the experiment's controls, hoping to maim or kill Lucas. Lucas's treatment was accelerated past its intent, inducing body-wide enhancement that gave him superhuman strength and durability. He used his new power to escape Seagate and made his way back to New York.[3]

Later it added a wing for superhuman criminals.[1]

In the alternate reality Earth-11418, Seagate Prison is used by the Americommand to hold political dissidents, including that reality's Luke Cage.[6] 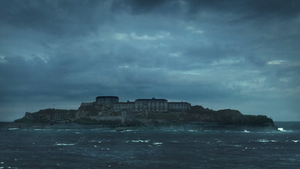 Seagate Prison is a maximum security prison located off the coast of Georgia. After Carl Lucas was wrongfully imprisoned at Seagate, he became aware of an illegal fighting ring and genetic experimentation using the prisoner as subjects. The fighting was run by Officer Albert Rackham while Dr. Noah Burstein oversaw the experimentation with Reva Connors working under him. When Lucas began to ask too many questions, two of Rackham's goons attacked him and left him for dead. Conners found him and convinced Burstein to try to heal Lucas with his experimental treatment. The treatment was interrupted by Rackham, whose interference resulted in an explosion that killed him, but gifted Lucas with bulletproof hard skin.[7] The explosion and cover up came to be known as the Seagate Incident.[8]

Trevor Slattery was incarcerated here after Tony Stark foiled and exposed Aldrich Killian's plans to assassinate President Matthew Ellis. During his time there, Slattery became a celebrity amongst the other inmates because of his Mandarin persona. His time there came to an early end when he was abducted by Jackson Norriss, a secret member of the Ten Rings terrorist organization disguised as a documentary filmmaker. Other inmates include Herman, Fletcher Heggs, White Power Dave, Justin Hammer and his boyfriend.[9]