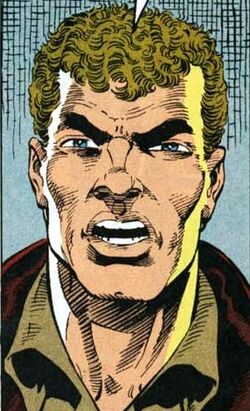 Sean Benard worked as a police officer at the Vancouver Police Department. Sean was in a very sticky situation when he met the man named Logan. He had just gunned down two of his fellow officers who had turned crooked, using the last of his bullets and was faced with the third who had a shotgun. Logan took out the gunman without killing him and escorted Sean to Ottawa, where he woke the Prime Minister and had him draft Sean into the Canadian secret service. Sean was escorted to the Flight Ranch where he met some rather unusual people and underwent extensive training by Dr L., until he finally met James Hudson and found out why he was there. He had been recruited as a member of Canada's official super team, known as the Flight. Using a suit of armor that Hudson had designed for planetary exploration, he was given the code name Groundhog.

On the Flight's first mission, to stop Egghead from launching a nuclear payload into New York City, many things went wrong: Smart Alec broke under the pressure, Wolverine could barely control himself and Saint Elmo had to sacrifice himself in order to save his friends.[1] Sean left, disgruntled, telling Hudson, "If you want someone to wear that suit so badly, have the courage of your convictions -- and wear it yourself!" Charges were never laid against Benard for the killing of his fellow-policemen. He was last seen watching the unveiling of Alpha Flight.[1]

Groundhog Armor: As Groundhog, Benard used an exploratory suit built by Am-Can and designed by James Hudson with sophisticated sensory equipment. It could generate electromagnetic blasts and fly.[1] The Groundhog suit allowed him to lift/press up to 10 tons.[citation needed]

Like this? Let us know!
Retrieved from "https://marvel.fandom.com/wiki/Sean_Benard_(Earth-616)?oldid=5574462"
Community content is available under CC-BY-SA unless otherwise noted.