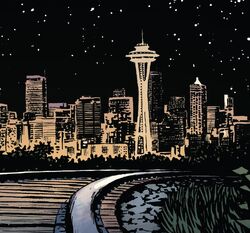 A major city in Washington State.

In 1942, the Sub-Mariner visited Seattle, and uncovered a secret fur smuggling operation orchestrated by Alaskan fur trapper the Fox using a secret underwater tunnel that went from Alaska to Seattle to avoid customs.[1] In 1945, the Seattle area was terrorized by the so-called Bronze Savages a group of Native Americans who used violence as a means of gaining back their ancestral lands. This attempt was stopped by Captain America and Bucky.[2]

Like this? Let us know!
Retrieved from "https://marvel.fandom.com/wiki/Seattle?oldid=5511246"
Community content is available under CC-BY-SA unless otherwise noted.