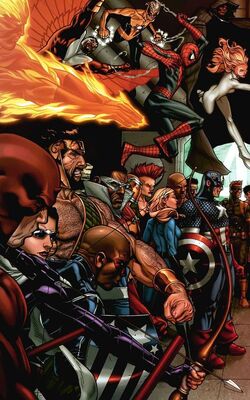 The Secret Avengers were founded by Captain America in response to the Superhuman Registration Act, set up precisely for those who wanted to fight against Iron Man's initiative for superhuman registration.

They fought against the registration act by helping other heroes and villains escape the country, or go into hiding. The team went through several roster changes during the conflict, with its biggest change happening after the death of Bill Foster, as several heroes left the group (seeing it as a mistake) and many more joined the group and viewing Foster's death as proof of the Registration force's evil.

The Secret Avengers' final battle was an assault on the super-prison 42 where they freed and were joined by many of the heroes imprisoned there before traveling to New York City for a final battle that ended with Captain America realizing that the normal people on the street wanted the heroes to register. Captain America asked the Secret Avengers to stand down, and the team dissolved, with many of the former members gaining amnesty for their actions by joining the 50-State Initiative. Some members still felt the need to rebel against the order and struck out on their own, though several key members of the Secret Avengers stayed together and took up the simple name of the Avengers (they saw themselves as the true bearer of the name, unlike the government-backed Avengers team).

Like this? Let us know!
Retrieved from "https://marvel.fandom.com/wiki/Secret_Avengers_(Civil_War)_(Earth-616)?oldid=6463712"
Community content is available under CC-BY-SA unless otherwise noted.