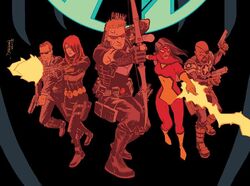 Base of Operations
S.H.I.E.L.D. Helicarrier
Affiliations

After a mysterious traveler from the future who launched an attack on a battalion of S.H.I.E.L.D. agents was killed, acting director of S.H.I.E.L.D. Maria Hill decided to activate the "Avengers Initiative", in order to form the agency's own Avengers unit. Daisy Johnson, at this time director of S.H.I.E.L.D. awaiting approval, also supported that step. The first recruits were two former members of the original black ops unit named the Secret Avengers, Hawkeye and Black Widow, along Nick Fury Jr., Phil Coulson, Mockingbird and Maria Hill. Due to the sensitive nature of their missions, every member (except Fury) would have memory implants, making them forget everything they did for the period of the operation by hearing a codeword, making them believe they were doing hobby activities during their time in the mission. Their first operation was to foil a plan of the terrorist group Al-Qaeda from using teleportation knowledge given by Andras Bertesy to execute a terrorist attack to the United States. The Secret Avengers followed the terrorist group to Budapest, were they got the coordinates of the attack from one of their members. After Hawkeye was left to be rescued by Black Widow as part of the mission, Fury settled a trap to the Al-Qaeda member who was going to perform the attack, by waiting him in the Oval Office and kill him.[2]

Against A.I.M. under Andrew Forson

In their second mission, the team rescued Taskmaster from Bagalia, in order to use him to infiltrate in A.I.M.'s new High Council.[3]

After A.I.M. stole an Iron Patriot Armor during the confusion in a conflict they incited against S.H.I.E.L.D. at a weapons expo,[4] the Secret Avengers, with the addition of Hulk, were given the task to kill Andrew Forson.[5]

Meanwhile, S.H.I.E.L.D. Intel came to the conclusion the Iron Patriot androids could be reasoned with, and agent Phil Coulson asked Colonel James Rhodes to talk to them, as he had experience and military training. Using holographic communication, S.H.I.E.L.D. hacked into A.I.M.'s network and allowed Rhodes to talk to the suits, who recognised him as "the Pilot", along Tony Stark being "the Maker". Rhodey managed to make the Iron Patriot army understand their actions of abruptly attacking tactical points of enemies of the US was unacceptable.[6]

After the Secret Avengers sent to kill Forson seemingly succeeded in their mission, Quake was suspended indefinitely for breaking the protocols, as Forson was the leader of a U.N. member nation, and Maria Hill was put in charge of S.H.I.E.L.D. once more, and the agents who took part in the assassination, Nick Fury, Black Widow and Hawkeye, were held for interrogation.[7]

In the aftermath of the mission, Mockingbird was taken prisoner by A.I.M. and brainwashed. Taskmasker tried to help Mockingbird escape, but was knocked out by A.I.M. agent Anton Trask.[8] The rest of the Secret Avengers attempted to rescue her, and after she disappearing during her rescue attempt, the team suffered a change of roster. Unknown to the team, Mockingbird went under the radar along with Daisy Johnson and Bucky Barnes.[9]

A Great Culling Is Coming

Meanwhile, M.O.D.O.K. had defected from A.I.M. to S.H.I.E.L.D. He brought with himself knowledge about A.I.M. and Maria Hill agreed to let him work for her in exchange for his intel.[10]

After the A.I.M. Island episode, Iron Patriot and Hawkeye quit the team. After miping their minds one last time, Hill abondoned the idea of memory implants. Spider-Woman was added to the team roster, and Hawkeye re-joined when A.I.M. goons chased him into a spa where Black Widow and Spider-Woman were relaxing.

When Coulson and Nick Fury Jr. were attacked by the Fury while attempting to repair a satellite, the other three team members raced into space and rescued them. Meanwhile, an assassin entered S.H.I.E.L.D. Helicarrier Iliad and attempted to kill Maria Hill, while stating: "A great culling is coming." However, M.O.D.O.K. rescued her.[11]

The Fury fell from space onto Earth and reappered at the chinese Kowloon Walled City. Nick Fury Jr. and Hawkeye retrieved it from there[12] and S.H.I.E.L.D. soon found out that the Fury was pregnant.[13]

After his fall from space, Phil Coulson seemed to suffer from PTSD. He single-handedly took a week off and traveled to Venezuela, in order to find out about the "culling" that was about to come. Hill asked Nick Fury to go through Coulson's possessions in order to find out what he planned. When Fury opened Coulsons locker, an acid was ejected out of it and blinded him, putting him in a coma.[14]

Maria Hill soon discovered that everything that had happened recently was orchestrated by M.O.D.O.K., who seeked to destroy S.H.I.E.L.D. from within and then replace Hill as head of the spy organization. What Hill didn't know was that M.O.D.O.K. had already backed down from his plan after falling in love with her.[1] When Hill tried to confront M.O.D.O.K., the evil scientist had disappeared from the Helicarrier, and she interrogated his assistant Snapper.[15]

Spider-Woman was able to decipher the language of the Fury with the help of a sentinel bomb named Vladimir, and it was revealed to repeat the same sentence over and over again: "The great culling is here."[16] It was revealed Snapper carried on M.O.D.O.K.'s plan after his men infiltrated the Helicarrier and took Maria Hill hostage, while Spider-Woman was able to fight them off Nick Fury's sickbed. On Venezuela, M.O.D.O.K. met Phil Coulson and Hawkeye and told them about his plan and change of heart, in addition that there had been a misinterpretation on the message: Not a culling was coming, but a calling.[17] After returning to the Helicarrier where they retrieved Nick Fury and The Fury (as the latter had cured Nick's injuries from the acid trap set up by Snapper), M.O.D.O.K. and the Secret Avengers started planning the next course of action to stop Snapper. After clarifying he didn't know of Snapper's location, M.O.D.O.K.'s assistant called him to gloat about his triumph, telling him where he was.

On the Venezuelan Rainforest, Snapper planned to unleash the monsters from a dimension calle Tlön on Earth.[18] After M.O.D.O.K. and the Secret Avengers arrived to rescue Hill, Snapper tagged him with a transmission conductor, as well as Maria Hill and other people, turning him into the medium of a communal mindscape that used emotional negativity to create a gate for Tlön's rise.[19] This was part of a plan, which continued with Spider-Woman using her pheromones to emotionally subdue Snapper. The rest of the Secret Avengers tagged themselves with transmission conductors to infiltrate the mindscape and try to imagine the best possible universe, hoping the force of their positive thoughts could reach Hill and outweight the negative of Tlön. When everything was coming apart at the seams, the final part of M.O.D.O.K.'s plan to defeat Snapper was put in motion, and Vladimir was dropped on the portal to Tlön. Vladimir opened a black hole which in contact with the Tlön gate created a singularity, reverting everything back to normal.[20]

After the day was saved, the members of the Secret Avengers took a vacation.[21]

Retrieved from "https://marvel.fandom.com/wiki/Secret_Avengers_(S.H.I.E.L.D.)_(Earth-616)?oldid=5693073"
Community content is available under CC-BY-SA unless otherwise noted.