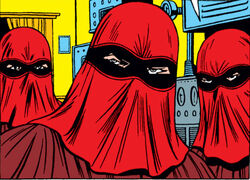 The Secret Empire began as a branch of THEM (itself a subsidiary of Hydra)[1] with its original purpose being to divert the attention of authorities such as S.H.I.E.L.D. away from Hydra's activities.[2] Following the first death of Baron von Strucker,[3] the Secret Empire gained independence from Hydra.[4]

Members of the Secret Empire are given a numerical codename that designates their rank within the organization.[2] The Secret Empire is headed by a nine person council made up of the highest ranking members called the Council of Nine with Number One serving as the supreme leader.[citation needed]

Boomerang was hired by the Secret Empire to steal plans for the Air Force's Orion Missile, but he was defeated by the Hulk. The organization also simultaneously fought Namor. It was also around this time that S.H.I.E.L.D. agent Gabe Jones went undercover as Number Nine and eliminated every member of the Council of Nine save for Number One himself.

Shortly there after, Number One accidentally killed himself in an attempt to blow up the Hulk.[5]

The Coming of The Griffin

Johnny Horton was captured by agents of the the Secret Empire. They assigned a surgeon in its employ to transform Horton into a superhuman being by using various techniques, including grafting wings and claws onto Horton's body permanently and administering an experimental mutagenic serum into him. Horton was named the Griffin after his new appearance, which vaguely resembled the mythological griffin, a creature that was half lion and half eagle.[6]

The Secret Empire kidnapped Havok, Polaris, Iceman, Angel, Mastermind, Mesmero, Blob, and Unus the Untouchable to order to harness their energy to power a "flying saucer".

The new Number One landed the saucer on the White House lawn and demanded the government surrender control to him or he would detonate nukes in every major American city. The Secret Empire was defeated by Captain America, Cyclops, the Falcon, and Marvel Girl. Captain America then pursued Number One through the White House before finally cornering him in the Oval Office. Number One unmasked himself, revealing himself to be a very high ranking U.S. government official[7] attempting a coup d'état. Rather than face capture he then committed suicide. This led to Steve Rogers giving up his role as Captain America for a while and taking on the mantle of Nomad.[8][9]

Later, Professor Power became the new Number One. He sought to trigger a nuclear war between the U.S. and the Soviet Union. The Defenders defeated Professor Power and the Secret Empire, as well as their agents Mad Dog and Mutant Force.[10]

The Secret Empire also sought to eliminate Moon Knight, who they believed had disrupted some of their operations. The real guilty party was Moon Knight's sidekick Midnight. When Moon Knight and his sidekick confronted the Secret Empire, Midnight was hit by an energy blast from the group's new leader, the mysterious Number 7. Moon Knight abandoned his sidekick, believing that he was dead but in truth he was still alive, though horrifically disfigured and maimed.[11] Number 7 ordered Midnight transformed into a cyborg, with his hatred for Moon Knight (for being abandoned by his mentor) and a mechanical failsafe that caused him to suffer intense pain if he disobeyed Number 7.[12]

Midnight was sent out on his first mission: kidnap the super-hero Nova so that the Secret Empire could transform him into a cyborg as well. The plan was foiled by the combination of Nova, Spider-Man, Moon Knight, Punisher, and Night Thrasher. During the battle, the Secret Empire nurse assigned to provide repair work towards Midnight's robotic body parts disabled Number 7's failsafe, allowing Midnight to kill Number 7 and assume control over the Secret Empire. However, along the way it was revealed that his nurse (and now lover), Lynn Church, was a cyborg as well.[13] A loyal follower of the original founder (the original Number 1), she served as a prototype for the process used to transform Midnight into a half-human, half-machine being that he became, to the extent that she allowed herself to be disfigured and maimed to facilitate her transformation into becoming a cyborg. The realization that his lover was insane caused Midnight to aid his mentor and his allies against Church, ultimately sacrificing his life to destroy her.[14]

The Secret Empire would later be part of a conspiracy to divide up the empire of Wilson Fisk. The meeting took place in Las Vegas, under the cover of a Secret Empire 'convention'. Many Secret Empire members simply believed it was a fraternal organization like the Masons or the Elks Club, which was a perfect cover for criminal enterprises. The Punisher got wind of this right away and the Empire sent two hit squads to attack him.[15]

The various warlords who attend the meeting began attacking each other nearly right away. Mickey Fondozzi and Microchip, associates of the Punisher, had been captured while spying on Baron von Strucker, and claimed to be Number Four and Number Eight, members of the Secret Empire. The Empire learned of this via a spy in Hydra. By coincidence, the real Four and Eight had not actually traveled to Las Vegas and this was enough to convince the others they had turned traitor. The Empire sent the Praetorian Guard to kill everyone involved, but Mickey, Micro and Strucker all survived.[16] Further encounters led to no progress at all and the Secret Empire members left Las Vegas. The Empire's plans came under the scrutiny of the 'Favor Broker', an opponent of Nomad.[17] He teamed up with the Punisher and Daredevil in an attempt to disrupt the meeting.[18] All they managed to do is kill some lackeys, Hand ninjas, and capture the Slug.[19]

Some time later, agents of the Secret Empire battled Hawkeye,[20] the vigilante group known as The Jury,[21] and a new Nomad.[22][23] The Secret Empire also sent agents to kill Taskmaster with hopes of claiming a billion dollar bounty.[20]

The Secret Empire, along with Hydra, A.I.M., Black Spectre, and Agence Byzantine negotiated a deal with Midas Investments to incorporate their various shell companies through Latveria. This would have made it impossible for the law to prove that any of these companies were connected to a terrorist organization.[24] To make sure the deal went smoothly Midas created the Omegadrive as a leverage point. Made from a discarded piece of a Fantastic Four Uniforms, the Omegadrive contained billions of gigs of data about the five cartels.

Like this? Let us know!
Retrieved from "https://marvel.fandom.com/wiki/Secret_Empire_(Earth-616)?oldid=6494845"
Community content is available under CC-BY-SA unless otherwise noted.