As a consequence of the Red Skull's manipulations with a sentient Cosmic Cube named Kobik, Captain America was secretly replaced by a twisted version of himself who was a Hydra sleeper agent. After months of careful planning, the different threads of his plan of conquest finally converged, as the world was being besieged by three different concurrent crises.

First, trillions of Chitauri were approaching the Earth at a time that the Planetary Defense Shield had been disabled by the attack of a Hydra agent at its generator base. Heavy-hitter superheroes prepared to hold the line while Iron Man and Ironheart fixed the damage. Meanwhile, Manhattan was under attack by the Army of Evil, a group of supervillain ex-prisoners of Pleasant Hill, drawing the attention of the numerous American superheroes to the scene. Finally, S.H.I.E.L.D. was taking action on a conflict in Sokovia, dispatching six Helicarriers after their base on the scene, Helicarrier Crescent, fell off the radar.

With the heroes being dealt critical blows on all fronts, Captain America began the final step of his plan. The Crescent suddenly appeared and crashed into the Illiad, having been taken over by Hydra and Doctor Faustus, who had the Crescent's crew under his control. The Illiad is boarded, and Captain America revealed his true allegiance to Sharon Carter, subsequently ordering Faustus' brainwashing message to be broadcast to the rest of the fleet. It was revealed the Shield's malfunctions were actually purposefully caused by Captain America, with superficial damage of Hydra's attack covering that up. Rogers activated the Shield, leaving Captain Marvel, Alpha Flight and the rest of the heroes in Earth's orbit exiled on the other side. Additionally, the Army of Evil's attack turned out to be a trap, used to lure countless of the nation's heroes to Manhattan and trap them within a Darkforce dome which engulfed half the island. Finally, Captain America moved the Helicarriers taken over by Hydra to Washington, D.C..[2]

After some time having passed since Hydra's takeover, the people of the United States of America were getting accustomed to their new fascist regime, mainly due to the use of mind-altering substances in water supplies to increase docility and receptiveness. Mutants had been displaced to the sovereign land of New Tian and Inhumans were being held captive in detention facilities. A handful of heroes that hadn't become exiled formed the Underground, an alliance of super-powered and civilian rebels led by Hawkeye stationed in The Mount in Nevada, and others under Hydra's influence joined Hydra's own Avengers.[3]

Still engulfed by the Darkforce dome, Manhattan had become a no man's land plagued by Baron Mordo's demons with Dagger acting as the only source of light for a few hours at a time. The island had no power or communication with the outside world, scarce food and drinkable water, and sickness due to poor sanitation. The heroes struggled to keep order, while the Kingpin took advantage of the situation by offering help in exchange for future retribution.[4]

Following an increment of Underground activity in the area, and the latest display of defiance when members of the Underground evaded custody while recruiting Shaun Lucas, High Council of Hydra pressured Captain America into laying siege to Las Vegas in response to the rebel activity.[3] It turned out Steve didn't order the attack, but had secretly given Madame Hydra the power to do it, and she carried it out.

As a consequence of the attack on Las Vegas, Black Widow set out to assassinate Captain America, and was joined by the younger heroes of the resistance, who didn't intend to kill Rogers but agreed with defeating him. She was opposed by the Tony Stark A.I. and Hawkeye, who planned to find the shards of the fragmented Kobik which had been scattered around the world by her former curator, Erik Selvig. This information was disclosed to the heroes by Rick Jones in a posthumous video message, in which he revealed the origin of Steve's face-heel turn.[4]

The Tony Stark A.I. and Black Widow mobilized to put their plans in motion. While Natasha trained the Champions, the other heroes sought help from the retired Falcon to leave the country. Hydra also began looking for the fragments, destroying an Atlantean temple while trying to retrieve a shard which had fallen in Namor's hands. Captain America additionally put his sights on Black Widow, tasking the Punisher with the mission to track her down.[5]

Both Hydra's Avengers and the Underground clashed at the secret Ultronic Territories in Alaska while trying to obtain a shard fragment in the hands of Hank Pym (who had been merged with Ultron). Ultron captured both groups and tried to have them reconcile, eventually giving the Underground the Cube shard after Ant-Man appealed to him. However, Hydra managed to even the score after Namor surrendered his fragment on account of the safety of his people.[6]

Over the following weeks, Iron Man's team continued globe-trotting in search for the shards, coming empty-handed at the end of most of their incursions, to the point the majority of the team eventually votes to return to The Mount, even if they only had acquired two shards in total. As soon as the heroes returned to the base, Hydra launched an attack after being tipped off,[7] with the mole being Ant-Man, forced to betray his team for the sake his daughter's safety. Using a temporarily-resurrected Hulk, Hydra broke through The Mount's defenses, but the Underground managed to evacuate in time. Being the last rebel to escape, Iron Man was ambushed by Captain America, and hindered by a device that prevented him from transferring elsewhere. After getting his armor heavily damaged when the Hulk crashed through the roof after decomposing, Tony attempted to take down Steve with him by self-destructing his armor, and apologized for having failed to save him. Captain America was saved from the resulting mushroom explosion that destroyed The Mount when Madame Hydra jumped into the scene and used a spell to teleport him to safety at the cost of her own life.[8]

Days later, at the rebuilding ceremony of the Capitol Building, Black Widow launched her assassination plan, revealing Miles one of the reasons for undertaking the mission was to prevent the fulfillment of a vision projected by the Inhuman profiler named Ulysses Cain, which had predicted the young hero was going to murder Rogers. Unfortunately, the Punisher's intervention of delayed the execution of Black Widow's plan, which gave Spider-Man enough time to confront Captain America alone. While Steve and Spider-Man were trading blows, Black Widow stepped in for the kid's safety, taking a hit from Captain America's shield which broke her neck. Enraged, Spider-Man beat up Captain America severely. Wasp stopped him, and convinced him to follow Natasha's wish, that he avoided becoming an assassin like her. Following the arrest of the Champions, Captain America prepared to declare war. Meanwhile, the members of the Underground learned of Black Widow's death, leading Sam Wilson to suit up as Captain America once again.[9]

As the Underground mobilized to liberate New Attilan, Hydra doubled their efforts to retrieve the Cosmic Cube shards left, launching attacks on New Tian and Wakanda, both nations whose leaders each held a shard, Emma Frost and Black Panther, respectively. This results in Frost's willingly handing over the shard and Black Panther being captured. During the break-in at New Attilan, the Underground came across an Inhuman named Brian McAllister whose powers allowed the Underground to secure one Cosmic Cube shard.[10]

With the objective to put to good use the limited reality warping power found within the Cube fragment, the Underground managed to broadcast a message to Manhattan and Alpha Flight, requesting their aid in coordinating efforts to bring down the Darkforce dome and the Planetary Shield, hoping some influence with the fragment could help accomplish those goals. The plan worked, and even though in the beginning it seemed like the efforts of the heroes from New York and Alpha Flight were fruitless, Captain America's use of the shard led to both the destruction of the Shield and the dissipation of the Darkforce dome.[11]

United at last, a contingent consisting of almost every single hero mounted an attack on Washington, D.C. which proved to be successful. Additionally, numerous people broke free from Hydra's grasp, including Vision, Odinson, Sharon Carter and Black Panther. The latter was rescued by the Winter Soldier, believed dead when Baron Zemo tied him to a rocket and attempted to kill him shortly before the Hydra take-over began. Even though Hydra's forces were decimated, the heroes were soon confronted by Rogers himself, wearing a suit of armor that granted him the power of the Cosmic Cube fragments in Hydra's possession.[12]

During the development of Hydra's conquest, the amnesiac remnants of the real Steve Rogers wandered the mindscape of Kobik, who had survived the destruction of her physical form and had sough shelter in her own psyche. After encountering people that resembled his mother, Bucky Barnes, Sam Wilson, Sharon Carter and even the Red Skull, Steve finally stumbled upon Kobik. The little girl returned Steve his memories, but feared she couldn't return Steve to the real world. Steve eventually encouraged to stand up against Hydra.[13]

By that time in the real world, the fascist Steve Rogers had effortlessly whisked most of the Underground away from existence as he began to rewrite the world in Hydra's image. Captain America, Ant-Man and the Winter Soldier survived, using Sam's fragment of the Cube. Sam handed over the shard to Steve, allowing him to complete the object. However, with Ant-Man's help, the Winter Soldier subatomically infiltrated the Cube as Rogers was assembling it. This act allowed Bucky to reach into Kobik's mindspace and bring out both her and the real Steve Rogers, who materialized in front of his fascist counterpart. After Kobik undid the changes to reality caused by the evil Rogers, the two Captain Americas battled. Following an arduous fight, the Hydra loyalist Steve Rogers was defeated. The heroes stood victorious, and in the course of the following weeks, the United States returned to normalcy.[14] 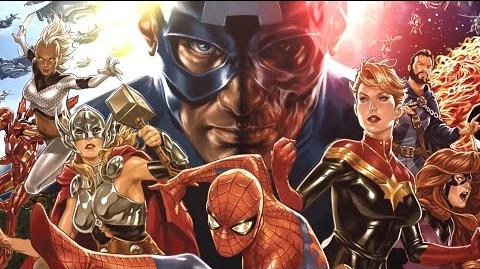 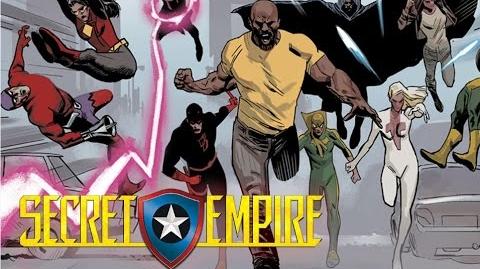 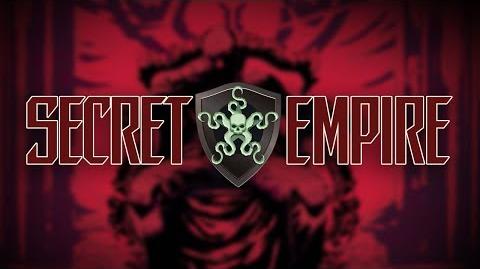 Like this? Let us know!
Português do Brasil Русский
Community content is available under CC-BY-SA unless otherwise noted.
Advertisement