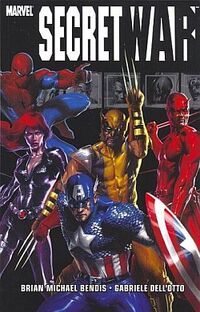 Nick Fury led a group of hand selected superheroes into Latveria on a secret war. The US government didn't sanction the action, the heroes in question (Spider-Man, Captain America, Daredevil, Wolverine, and Luke Cage) don't remember going (...). Fury believed that Latveria and their prime minister Lucia von Bardas (Dr Doom was trapped in Hell back then) were supporting terrorism by equipping B-List super villains with high-tech equipment. Whatever happened during the secret war was bad, it was shameful, and Fury has hidden the truth ever since. Now it's the present and the secret war has returned to bite him. Spidey, Daredevil, Captain America, S.H.I.E.L.D., and the Fantastic Four are facing horde of augmented villains.(...)[1]

Retrieved from "https://marvel.fandom.com/wiki/Secret_War?oldid=5825009"
Community content is available under CC-BY-SA unless otherwise noted.