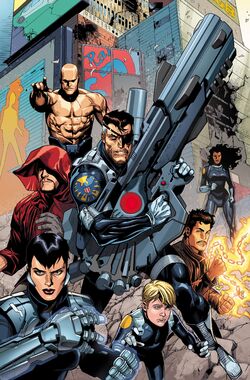 Origin
Nick Fury has rounded up a number of superhuman beings for use as agents against the Skrull Invasion.

Following his removal as Director of S.H.I.E.L.D. on the heels of his Secret War in Latveria, Colonel Nick Fury was forced to go underground. He was able to stay active in the shadows by providing support to the reformed Winter Soldier, and allowing Captain America to use one of his safe houses as a base for his Secret Avengers during the superhero Civil War.

But Fury had been up to more than that. After going into hiding, he was able to reignite his passions with his old flame, Contessa Valentina Allegra de la Fontaine. Learning that Val was attempting to steal SHIELD passcodes from him and kill him, Fury shot and killed her. On her death, however, she revealed her true nature: she had been replaced by a Skrull impersonator.

Recognizing that Earth was being invaded by alien sleeper agents hidden among the society, Fury have assembled a team of Secret Warriors to defend it. The Secret Warriors recruit were a varied lot. Fury chose them not only for their competence, but also for their relative anonymity: he knew that obscure heroes would be ones least likely to be targeted for replacement by the Skrulls.

He began with seismic-wielding former S.H.I.E.L.D. agent Daisy Johnson (Quake); Phobos (Alex) the 10-year old son of Ares; Yo Yo Rodriguez, the super-fast daughter of The Griffin; Hellfire (J.T. Slade), the mystical mercenary grandson of the Phantom Rider (Carter Slade); the son of Dr. Druid, Sebastian Druid; and the muscle-bound Stonewall (Jerry Sledge).

Ironically, Fury also attempted to recruit Layla Miller, but she was expecting Agent Johnson. Miller claimed that if she joined Johnson's/Fury's team, "it wouldn't work" but without her, they wouldn't fail. She wished to stay with the mutants because they would need her. She stated Johnson would live through this, but was going to lose a lot.[2]

By the time the Skrull Invasion became apparent to the rest of Earth's heroes, Fury and this "new team of Howling Commandos" were prepared.[6] They arrived during the battle against the Skrulls in Times Square, aiding the Young Avengers and the Initiative staff and cadets. The intervention of the Secret Warriors was crucial, helping to turn the tide of a losing battle against the Skrulls. Ms. Marvel (Carol Danvers), after being heavily blasted by a group of Skrull soldiers ended up rising in the middle of Fury and his group in Times Square as they fought, shocked by the return of the ex-S.H.I.E.L.D. leader.

As they quickly headed into the fray, Yo-Yo managed to rescue all the downed Young Avengers and Initiative cadets just before could be executed. Ms. Marvel proceeded to help, but soon after was shot by Fury, who was unconvinced she was the real Carol Danvers. After being shot back into another street, the Skrull onlookers quickly overran her. Fury then called his men to retreat so that they could plan the next move. The Secret Warriors regrouped at Fury's command post with the Young Avengers and their Initiative comrades.

Fury's Secret Warriors found a new purpose when Fury discovered that S.H.I.E.L.D. had been under HYDRA's control since its creation and that HYDRA's influence had reached even some of the highest levels of the United States government. They made the purpose of destroying both organizations.[7]

Later on during the Siege of Asgard, The Warriors joined up with Steve Rogers, the New Avengers, and the Young Avengers to fight off Norman Osborn's attack on Asgard.[8]

Retrieved from "https://marvel.fandom.com/wiki/Secret_Warriors_(Earth-616)?oldid=5750992"
Community content is available under CC-BY-SA unless otherwise noted.