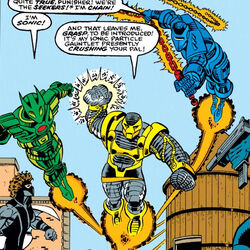 The Seekers consist of three former A.I.M. scientists, that have now gone freelance and have developed battle armor. One of the first team outings was to collect the bounty which had been placed on Spider-Woman's head. She was wanted by the US government after she helped the Avengers break out of the Vault. They met with a well- known informant called Scratch, who told Chain where to find her. Meanwhile Iron Man located Spider-Woman, because he was able to trace her energy residue from her psionic webs. Iron Man told Spider-Woman that the Avengers owed her a great debt. All Spider-Woman wanted to do was to see her daughter Rachel, She was conflicted whether to turn herself in or to live as a fugitive. Iron Man decided to help her with her daughter's situation, and told her he would return.[2]

They track her down to Denver, Colorado and try to take her down. Grasp's gets Spider Woman with his shock net and starts a small brush fire. He then clamps her leg with one of his gauntlets and Sonic and Chain surround her. Iron Man arrived to help and she removes the gauntlet from her leg and takes out Chain when she tosses him to the ground and smashes his chest. Sonic knocks Iron Man out of the air with his sound cannon and attaches a device to Iron Man's chest plate and hits him with a surge of energy. The pain is unbearable but Iron Man focuses his pulse bolts on the device and destroys it. He then takes out Sonic with his concussion beam. Grasp sees his two comrades down and tries to escape. He is suddenly caught by Spider Woman's psionic webs and forced to take his armor off, the fighting stops when Spider-Woman decides to surrender to the US government.[2]

Different for each Seeker.

Self propelled jet system in the boots of each Seeker.

Even through the Seekers' armors are impressive themselves, they show a lot of weaknesses; like the fragility to extreme changes in temperature, and massive impacts, also they don't offer protection against energy based attacks.

In Spider-Man Friends and Enemies issue 2 the Seekers claim to have taken on 3 new members. Presumably two of those members were Laserworks and Fireball who were first seen in Darkhawk 35. The sixth member of the team is unnamed unless Chain Lightning and Chain are two separate members.

Like this? Let us know!
Retrieved from "https://marvel.fandom.com/wiki/Seekers_(Earth-616)?oldid=6107927"
Community content is available under CC-BY-SA unless otherwise noted.