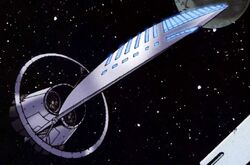 At some point after losing his job at Project P.E.G.A.S.U.S., Dr. James Power got to work at S.W.O.R.D.[1]. This however made him and his four children, the young superhero team Power Pack, a target of the Skrulls, who had set their eyes on S.W.O.R.D. technology, in particular a Planetary force field disruptor that would allow them to end a blockade put on their homeplanet Satriani. Four Skrulls, lead by commander Lyja, impersonated the Power children[2] and convinced Dr. Power to take them to S.W.O.R.D. during Take Your Kids To Work Day.[1]. Once there, they subdued him and used his badge to gain acces to Peak VII and steal the force field disruptor. At this point, Paibok betrayed his team and stole a set of inhibitor colars and cocoon guns from S.W.O.R.D. to make his teammates his slaves and take down the real Power Pack.[3].