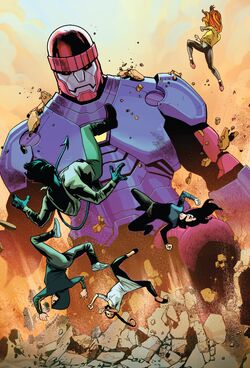 Sentinel-X was originally under the command of the Indian Mutant Defense Force. Lakshay Singh ordered for the Sentinel to be deployed after Jean Grey and her allies raided the IMDF's headquarter to rescue the mutant technopath Trinary.[1] However, Trinary used her powers to bend the Sentinel's will to her command and it was used by Jean Grey and her allies to return to Wakanda.[2] Afterwards, the robot was rechristened Sentinel-X. Its weaponry systems were removed to make room for seats to turn in into an adequate means of transport for Jean Grey's X-Men.[3]

Like this? Let us know!
Retrieved from "https://marvel.fandom.com/wiki/Sentinel-X_(Earth-616)?oldid=6098261"
Community content is available under CC-BY-SA unless otherwise noted.