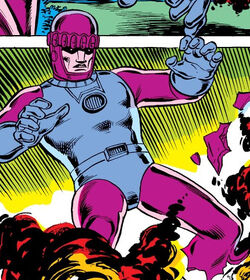 After the second Brotherhood of Evil Mutants tried to assassinate Senator Robert Kelly while he was performing a public research on the possible threat of superhuman beings and mutants, the President's Cabinet authorized secret and illegal Project Wideawake to research and, if needed, capture any superhuman mutant that the Project management could consider a threat to national security. The Project's head was Henry Gyrich, answering only to the President, with Senator Kelly himself as an special consultant.


The government contacted industrial tycoon Sebastian Shaw, ignoring that Shaw was a evil mutant himself, to build the new breed of Sentinels. Shaw Industries is authorized by the government to build top-secret Sentinels to be used in Project Awakening.


Shaw produced three models: Mark IV Sentinels, Mark V Sentinels and Mark VI Sentinels. None of these models proved to be as formidable as the Mark II and Mark III Sentinels. The models were constantly being modified and improved. Shaw secretly used Sentinels to attack his own enemies, the X-Men, but the government was unaware of this.

Mk IV Sentinels were able to lift up to 70 tons.

Flight under their power.

Like this? Let us know!
Retrieved from "https://marvel.fandom.com/wiki/Sentinel_MK_IV?oldid=5780503"
Community content is available under CC-BY-SA unless otherwise noted.