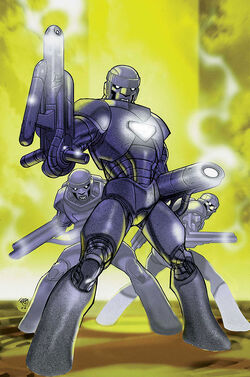 Valerie Cooper gave a proposal for a new type of Sentinel that would be piloted. She cited that the government can not rely on the Fantastic Four or the Avengers, much less the X-Men during a crisis and thus needed its own sanctioned superhero team. A robotic duplicate of the Bruce Banner (Earth-616) was used in a demonstration in front of several congressmen.[1]

The new models were developed by Tony Stark. James Rhodes was selected as Direct Command Officer and instructor. Various candidates were selected to be part of this new Sentinel Squad.[1]

They were pushed hard, with initial 'training simulations' against the likes of Galactus and the Silver Surfer.[1]

Their initial mission was to protect a senator targeted by Hydra due to his anti-terror legislation. They apprehended agents, who then triggered explosives and unleashed the Growing Man. Slayton was injured and the mission failed.[2]

The teams were sent to the Savage Land to stop a plot by the Savage Land Mutates altering dinosaurs. Most of the squads were lost due to attacking head-on. Lexington's team managed to escape, also freeing Rhodes.[3]

The team then went to Ecuador to exterminate the Sentinels created by Cassandra Nova.[4]

The O*N*E was formally activated by the President due to the events of "M-Day". The squad was launched and headed to the Xavier Institute to monitor the remaining mutants.

They got into a brief quarrel with the X-Men but stopped after Emma Frost revealed the units were piloted. The two groups then joined forces when the mutant hating fanatical group known as the Sapien League attacked the Mansion.[5]

The squad was stationed outside of the Xavier Institute and monitored the status of the mutants living there.

When Vulcan attacked the X-Men, he destroyed a Sentinel, along with killing Nathaniel Briggs.[6]

During Apocalypse's attack, two prototype Sentinels known as Crazy Train and War Machine were activated after Apocalypse destroyed the other sentinels.[7]

When William Stryker went on his crusade against the X-Men students in an effort to kill them all, he used an arm of Nimrod to shut down the sentinels.[8] Later, Hellion destroyed a sentinel as well.[9]

When the Children of the Vault sent Northstar and Aurora to attack the X-Men, the sentinels could not get in to the mansion, where the fight was taking place.[11] Later Exodus stopped the sentinels also.[12]

The Sentinels were ultimately destroyed. All units apparently died.[13]

During World War Hate, O*N*E agents operated on Mk VIII Sentinels[14] in order to retrieve the "Nuclear Football" that X-Factor had stolen (due to the President, under the affect of the hate wave, intending to use it to launch a full-scale nuclear conflict).[15]

The Sentinels formed a siege against Serval Industries's HQ, where the Football was stored, but were repelled by a force field, leading them to abduct Angela Snow as an hostage. Once the field was down, a battle opposed the Sentinels, and they were eventually destroyed by Danger.[14]

Like this? Let us know!
Retrieved from "https://marvel.fandom.com/wiki/Sentinel_Squad_O*N*E_(Earth-616)?oldid=6438725"
Community content is available under CC-BY-SA unless otherwise noted.