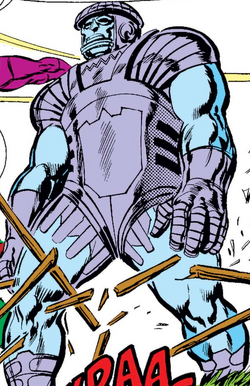 The alien species known as the Kree developed and built the Sentries to watch over their military advanced bases and supply depots throughout the Kree Empire and beyond.

Some 80,000 years ago, in Kree year 1220, Kree scientist Bronnek developed the prototype Sentry. The Supreme Council of the Kree Empire began to mass-build Sentries for military purposes. Hundreds of thousands of Sentries were built, although only a few thousand are currently active.

Sentry 213 was the first Sentry sent to the Earth's system, and it was placed in a little surveillance/supply depot on the surface of Uranus. It was discovered by an exiled group of Eternals, who proceeded to destroy the Sentry and invade the depot.

The second Sentry sent to the Earth system was Sentry 459, which escorted a team of Kree scientists wanting to research the most advanced life form of the system some 25,000 years ago. The Kree noticed that Earthlings could evolve to become advanced beings similar to the Eternals, so the Kree performed their own experiments, creating a genetically-advanced tribe that would become the Inhumans. The scientists left, but Sentry 459 was programmed to keep Inhumans under surveillance, monitoring their progress in civilization. The Kree wanted to one day use the Inhumans as an army.

Millenia after that, Inhuman geneticist Randac discovered the mutagenic Terrigen Mist that could genetically alter his kin. Sentry 459 activated for the first time and contacted its leaders. After which it returned to its hiding place and remained there for some millenia.[1]

During the mid-20th century, archaeologist Daniel Damian discovered the advanced subterranean base of Sentry 459 on a small island in the South Pacific. The Sentry re-activated due to the alarm system and again contacted its masters. One of the surveillance devices attracted the attention of the Fantastic Four, who were on vacation nearby. the Sentry fought them, but the Fantastic Four defeated the robot, freed Damian and his aide and escaped.[2] The Sentry was later placed under custody of the United States government and taken to Cape Canaveral.

Due to this defeat, the Kree sent their main agent Ronan the Accuser to Earth.[3]

Ronan re-activated the Sentry after that, and used it in a scheme to invert the evolution in Earth. The scheme failed miserably and Ronan abandoned the Sentry on the Earth's North Pole.[6]

Kree agents Mac-Ronn and Tara found the Sentry and erased its previous programming and memories. They loaded the Sentry on their ship but, before they could escape with it, S.H.I.E.L.D. shot down their ship. The Sentry fell near Mexico City and went on a rampage, until stopped by Mar-Vell.[7]

The Sentry 459 was eventually destroyed by Ronan.

Like this? Let us know!
Retrieved from "https://marvel.fandom.com/wiki/Sentry_459_(Earth-616)?oldid=5484919"
Community content is available under CC-BY-SA unless otherwise noted.