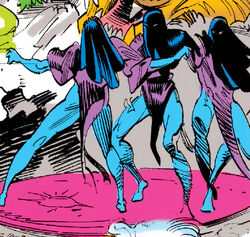 The Seraphim were descended from the Bird-Men of Akah Ma'at, a race created by the Elder Goddess Oshtur[2] as a counterpoint to Set's and Chthon's beast races.[3] Agamotto chose a new Sorceress Supreme from among their ranks, Shamhat Saraswati. Guided by Shamhat and her sponsors Oshtur and Agamotto, the Bird-Men of Akah Ma'at soon evolved into powerful sorcerers and almost godlike beings, the Winged Lords, with Varuna becoming the most powerful among them.[4]

Chthon's lies caused Varuna, the most powerful of the Winged Lords of Akah Ma'at, to become suspicious of the "lower races",[4] and some of Akah Ma'at eventually grew indifferent to the well-being of "lesser" beings. The most evolved of the Bird Men split into two factions:[4]

The ideological dispute grew into a civil war, with the help of Chthon,[7] who took advantage of this schism, and turned the factions against one another.[5] Ultimately, the Seraphim and Asura grew so destructive,[7] and the conflict caused massive earthly devastation, that Oshtur was forced to intervene.

Oshtur banished both the Asura and Seraphim,[4] and the whole city, into the Dark Dimension (The Splinter Realms, or the "Archipelago of Anguish and Redemption"),[5] to the extradimensional Planes of Sephiroth.[4] By 11,000 BC, the Bird Folk had "ascended".[8] One account mention the Winged Lords "prepared to journey [...] into the Higher Realms",[6] though the exact circumstances of the banishment are unknown.

Stranded in a hostile environment, the Seraphim and Asura secured an uneasy yet lasting peace. Together, they forged the Citadels of Sephiroth, who served as a line of defense against creature from the Dark Dimension that would invade the Lower Realms.[5] The Bird Men continued to evolve there[3] and still reside there.[6]

The Seraphim became at some point (possibly before their banishment) mystic principalities, whose names were often invoked for spells such as the Shield, the Skill, the Speed, the Circle, and the Serum of the Seraphim. They became known across the dimensions for their spells of protection and defense.[2] They also became enemies of Shaeol, and would later be involved in the extradimensional War of the Seven Spheres, themselves opposing Shaeol.[9]

The S'raphh, a pure-hearted race that resided on Earth's Moon millenia ago, may have been descendants of the Bird-Men of Akah Ma'at, perhaps remnants of the Seraphim faction who might have evaded the banishment of their people.[10]

War of the Seven Spheres

Before the War of the Seven Spheres began, many of the Principalities and mystic entities usually invoked for power sought to recruit Doctor Strange to fight for them. Escaping them by using spells from other entities, Strange eventually ended up among the Seraphim after having used the Shield of the Seraphim to escape Cyttorak. The Seraphim asked for Strange's help to march against their enemy, Shaeol. Soon, Cyttorak, Ikonn, the Vishanti (Agamotto, Oshtur, and Hoggoth), the Faltine, Raggadorr, Munipoor, Satannish, Valtorr, and Denak arrived to claim Strange for their side. To escape them all, Strange invoked the Law of Emancipation, relinquish the ability to call upon any of the powers and principalities.[9] The conflict would last five thousand years, though waged within months by human reckoning.[11]

Retrieved from "https://marvel.fandom.com/wiki/Seraphim_(Akah_Ma%27at)_(Earth-616)?oldid=6082503"
Community content is available under CC-BY-SA unless otherwise noted.