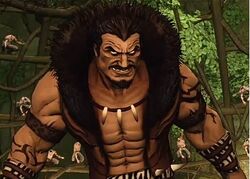 Rest now, my prey. Save your strength. For when you awake, we begin... the hunt.

Kraven started teaching a group of mercenaries how to hunt. After bidding for a fragment of the Tablet of Order and Chaos, he tricked Spider-Man into entering in gauntlet in exchange for the tablet. After Spider-Man defeated him, Kraven felt he had lost his honor and decided to use the tablet instead, gaining superhuman reflexes, regeneration, speed, and strength; however, this wasn't enough as he was again defeated by Spider-Man. During the credits, he was shown attempting to catch a bunny, but due to his injuries, he failed rather miserably.

Kraven went missing sometime after joining the regrouped Sinister Six, with some believing him deceased.

By 2099, Kraven would be commercialized with toys of him being sold.[1]

Like this? Let us know!
Retrieved from "https://marvel.fandom.com/wiki/Sergei_Kravinoff_(Earth-TRN579)?oldid=6057450"
Community content is available under CC-BY-SA unless otherwise noted.