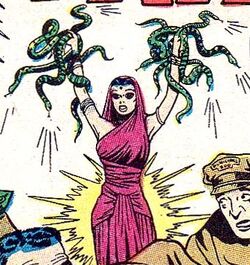 Not much is known about the woman who was known as the Serpent. She is of Indian descent and worshiped snakes as holy creatures, and was part of a snake worshiping cult. She mastered the ability to transform into a poisonous snake. By 1951 she was living in the United States and became horrified that snakes were being kept in zoos. She targeted a specific zoo in New York City, going there by day to examine the creatures and by night transforming into a snake and poisoning zoo staff.

The deaths were ruled as accidents by the zoo itself. But the deaths were considered suspicious by the homicide division of the police as well as the Amalgamated Insurance Company that insured the zoo. The insurance company sent their agent Robert Grayson -- in reality the Uranian super-hero known as Marvel Boy -- to investigate the deaths. Spotting the Serpent in the snake building, Marvel Boy followed her home but she somehow escaped. Marvel Boy found snake cages and books on the snake cult in her apartment and became suspicious that she was some how involved.

Marvel Boy then spent the night in the zoo keepers quarters. That night the Serpent changed into her snake form and tried to attack Marvel Boy. But the fast moving hero dodged her deadly strike and blinding the snake with his light beams. When the snake tried to escape out from under the door, Marvel Boy landed a fatal kick on the creature. It still managed to slither out and when Marvel Boy went out after it he found the Serpent in her human form outside seriously injured and refusing help. She chastised society for imprisoning creatures she considered to be holy before walking away. The Serpent did not make it very far as she soon collapsed from her injuries and died. Marvel Boy called the authorities and had the body taken away. While the case was considered closed, the source of her powers and ultimate motivation remain a mystery.[1]

The Serpent had the ability to transform herself into an actual snake whose venom was lethal to human beings. The nature of her powers are unexplained.

Like this? Let us know!
Retrieved from "https://marvel.fandom.com/wiki/Serpent_(1950s)_(Earth-616)?oldid=5737087"
Community content is available under CC-BY-SA unless otherwise noted.