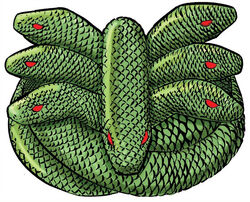 The Serpent Crown was created in the final days of pre-Cataclysmic Lemuria. Trapped in a pocket dimension since before the time of man, the Elder God Set influenced the Earth through his Serpent-Men and the spread of his worship. The famed human alchemist Atra was instructed by the Serpent Men on how to create a vessel for Set's power, which Atra hoped to use to overthrow Deviant emperor Phraug and their totalitarian rule of the humans of Lemuria. Set corrupted Atra's mind over time, however, so he turned to evil and killed his own daughter for standing in his way. When he confronted Phraug, Atra was surprised to learn the Deviant was also a Set-worshipper; they had simply manipulated Atra into creating the Serpent Crown for them. Atra and Phraud fought over the Crown as Lemuria fell before the assault of the Second Host of the Celestials, and the Crown was lost in the Cataclysm.[3][4]

The Serpent Crown was lost until six hundred years ago, when it was discovered by Naga. One of the water-breathing people who founded a new Lemuria under the seas, King Naga discovered the Crown in cursed waters and used it to declare himself God-Emperor of Lemuria and representative of Set himself.[5]

Naga had the Crown alchemically treated so that wearing it made his lifespan virtually immortal. However, a revolt against his tyrannical rule eventually came from a pact of telepathic Lemurians, who stole the Crown in the dead of night and carried it to Antarctica. Establishing a colony eventually known as the Ancients, the rebels encased the Crown in a metal to lessen its hypnotic influence. Over time, however, one of the brothers who founded the colony, Psycatos, succumbed to its influence and was transformed into the almost mirror image of Naga himself. After murdering his returning brother Bekkit, though, Psycatos had a moment of clarity and tossed aside the Crown. He triggered an explosion that destroyed the city of the Ancients and committed suicide before Set could reclaim his mind.[6][7]

In the early 20th century, the City of the Ancients was uncovered by Paul Destine and Leonard MacKenzie. Destine turned on MacKenzie and was trapped in the buried city by his own actions, but he discovered the Serpent Crown, still in its disguised shell. Calling it his Helmet of Power, Destine augmented his own natural psychic abilities with the Helmet, and survived for decades in the buried city, passing in and out of suspended animation. It was through his actions (and the Crown's) that old Atlantis fell to a series of explosions and Leonard MacKenzie's son, Prince Namor, lost his memory for several decades. Destine, calling himself Destiny, eventually escaped from the City of the Ancients with the Helmet of Power, but became completely mad and died while under the Helmet's influence.[8][9]

Namor recovered the Helmet of Power, unaware of its true origins. When he brought it back to Atlantis for study, the true Serpent Crown emerged and corrupted the minds of Dorma and the Atlantean people. The strong-willed Namor removed the Crown from Atlantis, but was attacked by Karthon the Quester, a soldier of Lemuria who served the still-living mad-king Naga. The Crown was brought back to Naga, but as he fought the Sub-Mariner, Karthon realized how insane his emperor was and turned against him. The Serpent Crown was buried deep in a crevice after Naga's death.[10]

Retrieved from "https://marvel.fandom.com/wiki/Serpent_Crown?oldid=6076135"
Community content is available under CC-BY-SA unless otherwise noted.