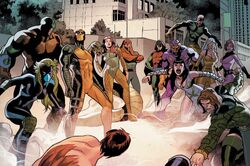 Serpents of the World Unite!

The Serpent Society is a business enterprise of criminals and mercenaries whose costumed identities are based on snakes. The Society remains one of the best-organized, most successful coalitions of criminals in operation today. The society is the brainchild of Seth Voelker, alias the Sidewinder, who was inspired by three previous coalitions of snake-themed criminals, each named the Serpent Squad.[1]

Sidewinder convinced Anaconda, Black Mamba, and Death Adder of the sincerity of his intention to help them better their lot, and sent them to contact Asp, Bushmaster, Cobra, Cottonmouth, Diamondback, Princess Python, and the Rattler. At an introductory meeting at a Manhattan hotel, which Viper refused to attend, Sidewinder laid out his plan: the various snake-criminals would band together as a single society. This society would function not unlike a labor union in that it's members would receive a guaranteed pay, better access to technology, and insurance and health benefits.[1]

Constrictor was unimpressed by the proceedings and attempted to alert the Avengers. Anaconda later found Constrictor and beat him within an inch of his life as punishment.[1]

The Serpent Society's first paying assignment was a contract on the life of the original M.O.D.O.K., the renegade former leader of AIM, taken out by AIM's new leaders. The Society's success in killing M.O.D.O.K. established their reputation as hired criminal talent of the first caliber.[2]

The membership of the Society has changed considerably over time. Princess Python deserted the group during the M.O.D.O.K. affair.[3] She was captured and brainwashed to forget Society secrets, and was expelled from their ranks. [4] Death Adder was slain by one of the vigilantes known as Scourge while returning Princess Python to the Circus of Crime.[5] Sidewinder found Death Adder's corpse and ordered the other members to find the killer, though they never did.[6]

The Viper (Ophelia Sarkissian) plotted to take over the Serpent Society and enlist its members in her scheme to introduce a mutagenic chemical into Washington, D.C.'s water supply that would turn its citizens into insane reptilian creatures.[7] Four of her operatives, Black Racer, Copperhead, Fer De-Lance , and Puff Adder, caught the attention of Sidewinder in Las Vegas, and he invited the quartet to join the ranks of the Serpent Society.[8]

The Viper then led a takeover of the Society's headquarters, the Serpent Citadel, aided by her operatives Boomslang, Coachwhip, Rock Python, and Slither. Viper poisoned Sidewinder, but Diamondback managed to escape with him and enlist the aid of Captain America, who was then using the identity known simply as "the Captain." Anaconda, the Cobra, Rattler, and Cottonmouth decided to support the Viper, who imprisoned and poisoned those Serpent Society members who would not serve her. The Captain, Diamondback, and their allies Nomad and Demolition Man succeeded in saving the captive Society members and defeating those serving the Viper. Disillusioned with the Viper and her plan to mutate innocent people, the Cobra himself defeated the Viper and turned her over to the Captain.[9]

With the Viper's takeover thwarted, the Serpent Society reorganized at a new secret headquarters. Bitter over his betrayal by certain Society members, Sidewinder resigned from the Serpent Society. Cobra became the Society's new leader, adopting the codename King Cobra, and a number of the Viper's operatives joined the Society. The membership roster of the Society then consisted of Anaconda, the Asp, Black Mamba, Black Racer, Boomslang, Bushmaster, the Cobra, Coachwhip, Cottonmouth, Diamondback, Puff Adder, the Rattler, and Rock Python.[10]

The Deviant priest-lord Ghaur and the former Lemurian empress Llyra contacted Sidewinder, thinking he still headed the Serpent Society, to hire them to find certain mystical objects they needed to reconstruct the Serpent Crown. Sidewinder had then turned the contract over to King Cobra, but when the X-Men thwarted the Serpent Society, Sidewinder stepped in to complete the assignment. He turned over a fraction of the reward money to the Society.[11]

Diamondback started dating Captain America, unbeknownst to the rest of the Serpent Society.[12] After learning of her romantic interest's identity, King Cobra ordered a trial to find a suitable punishment. Most of the Society voted guilty, but before she could be executed, she was saved by Sidewinder. Diamondback sought help from Captain America, and the pair stormed the Serpent Citadel to rescue Asp and Black Mamba, who had helped Diamondback.[13]

Anaconda, Puff Adder, and Rock Python, the only serpents to escape imprisonment after the Trial, later ambushed Diamondback, Black Mamba, and Asp. The trio defeated the three women, but were interrupted by M.O.D.A.M., who dispatched of Puff Adder and Rock Python and invited the four women to join the Femizons, an army of female supervillains.[14]

After their stint with the Femizons, Black Mamba and Asp left the Serpent Society to strike out on their own, attempting to reform as their close friend Diamondback had done. The three formed a detective agency called B.A.D. Girls, Inc.. (a play off the acronym their names created.) The team was short lived, and the members parted company soon afterwards.[13][15]

The Serpent Society resurfaced in Arizona, with King Cobra searching for an heir to take over his legacy. He recruited the mysterious new criminal known as Jack Flag, who had proved himself by defeating Fer-de-Lance and Rock Python and later retrieved a painting from Mr. Hyde. Jack Flag agreed to the initiation test and donned King Cobra's suit, managing to outmaneuver the other serpents. Jack Flag later betrayed the Serpent Society, and alerted Force Works to their actions in Arizona. Jack Flag, Free Spirit, and Force Works managed to defeat the Serpent Society and take them into custody.[16]

Black Mamba later became a model and claimed there wasn't much of a Serpent Society left after Puff Adder asked her to return.[17] Several Serpent Society members were then seen individually: Cottonmouth was seen battling Black Panther[18], Anaconda joined the Six Pack[19], Black Mamba joined the Masters of Evil[20], and King Cobra had returned to his former partner, Mister Hyde.[21]

The Serpent Society eventually reunited, however, and tried to exact revenge on Captain America and Diamondback (who was later revealed to be a Life Model Decoy), though they were ultimately defeated.[22]

Some time later, the members Asp, Anaconda, Bushmaster and Cottonmouth and Puff Adder were seen in San Francisco robbing a bank, but they were all defeated by Hope Summers.[23]

Viper (Jordan Dixon) took the reins of the Serpent Society and reinvented them as the "Serpent Solutions," a company involved in dubious dealings with big business. Using bankrolled facilities all over the United States and personnel from both Hydra and A.I.M. to become involved in genetic experiments, initially the cosmetic industry, but with sights on other areas of economy, including the military-industrial complex. Their modus operandi involved getting hired by big companies to do their dirty work, and subsequently sell the work back at a huge profit, while giving their employers plausible deniability of any involvement.[15]

When he was trying to gather info on the Serpent Solutions with Diamondback, Captain America (Sam Wilson) was attacked by Puff Ader, Black Racer and Cottonmouth. During the fight, Cap unfortunately discovered that Diamondback was working with the Serpent Society, after being stabbed by her with a poisoned dagger that knocked him down.[15]

The Serpent Society brought Cap to their Serpent Tower in Wall Street, and kept him paralysed using Asp's venom-bolt. After giving Captain America a speech on the supposedly righteous nature of his business that would save the economy and make America marvelous again, Viper threw Sam out of the window. However, Sam was rescued from falling to his death by his most recent ally, the winged mutate Joaquín Torres.[24]

The Serpent Society soon caught up to the two heroes, and Joaquin held his own against the villains until Captain America could recover from the paralysis and more reinforcements could arrive, in the form of Misty Knight and D-Man. Additionally, after Viper's attempts to kill Sam and young Joaquín, Diamondback had a change of heart and helped the heroes. In the end, the Serpent Society was defeated, their business was shut down, and they were arrested by a S.W.A.T. team.[25]

The members of the Serpent Society were among several animal-themed super-villains captured by Taskmaster and Black Ant to serve as hunting targets in Central Park for a host of wealthy participants controlling robotic drones, part of a plot concocted by Kraven the Hunter and Arcade.

While fleeing from the indestructible drones, Cottonmouth and Black Mamba revealed they did not believe Viper was a suitable leader for the Serpent Society. Later, most of the villains looked to Vulture to lead them in rebelling against the drones.

When the force field keeping the criminals inside Central Park dissipated, several superheroes ambushed and apprehended members of the Serpent Society alongside the other escaped villains.[26]

Several members of the Serpent Society, all male, were next seen at the Criminal Technology Show Expo. M.O.D.O.K., who had seen the Society at the bar earlier, followed Bushmaster, Rattler, Cottonmouth, Rock Python, Puff Adder, and Boomslang into the restroom and beat them to near death. Tony Stark, disguised as a HYDRA agent, found the men and demanded M.O.D.O.K. help him hide them before they regained consciousness. During the weapons auction, King Cobra burst in and revealed M.O.D.O.K. and Tony Stark's disguises and started a brawl among the supervillains.[27]

All members of the society had a "special homing device surgically implanted in their heads" (on order of their former leader Sidewinder to spring them from jail if they were ever apprehended).[28]

Like this? Let us know!
Retrieved from "https://marvel.fandom.com/wiki/Serpent_Society_(Earth-616)?oldid=6463753"
Community content is available under CC-BY-SA unless otherwise noted.