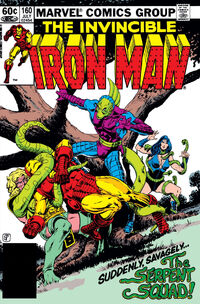 The third Serpent Squad was set up by the Roxxon Oil company, via executive Hugh Jones. The team roster consisted of Sidewinder, Anaconda, Black Mamba, and Death Adder. The team was created to retrieve the Serpent Crown. During the mission the battled the Thing and the hero Stingray but the team eventually won.

The Inhuman Triton later joined the heroes to help defeat the team trapping Anaconda, Death Adder, and Black Mamba under the sea. Sidewinder escaped the assault and retrieved the Serpent Crown for Hugh Jones. They later escaped with the help of Anaconda and the became a team of mercenaries for hire, which brought them into conflict with Iron Man The squad was later invited to join the Serpent Society, which they all accepted. The other Serpent Squad members such as Cobra and Princess Python also joined the team.

Retrieved from "https://marvel.fandom.com/wiki/Serpent_Squad_(Roxxon_Oil)_(Earth-616)?oldid=3327725"
Community content is available under CC-BY-SA unless otherwise noted.