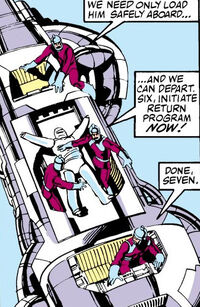 This stealth flying vehicle was designed by Doctor Doom to be used by his robotic agents Servo-Guards. A single robot could pilot it, and the vehicle had seats for three more passengers, plus a space for a fifth occupant. The vehicle could cover the distance between Doomstadt, Latveria and New York City, US in four hours.[1]

Doctor Doom sent this vehicle with four Servo-Guards (Units Five, Seven, Fifteen and Six as the pilot) to a New York City hospital to recover the mummified body of alien Tyros of Lanlak, who had suffered important injuries and had not been identified by the Americans. Six kept the vehicle under Tyros' windows until his peers recovered the body, broke the glass and left the hospital through the window. The robots left for Latveria in the craft, worried because there was an important presence of superhumans in the area.[1]

Never explicitly named, the narrator in Fantastic Four #258 calls it "the sleek craft" but this is likely to be a description.

Retrieved from "https://marvel.fandom.com/wiki/Servo-Guards%27_Sleek_Craft?oldid=3572535"
Community content is available under CC-BY-SA unless otherwise noted.