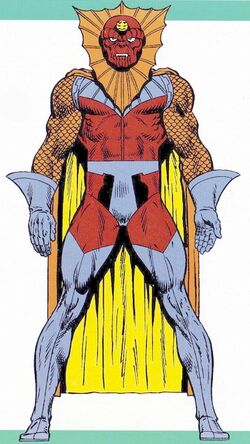 Seth Voelker was born in Kenosha, Wisconsin. As Sidewinder, he was originally hired by the Roxxon Oil Company to retrieve the Serpent Crown, and outfitted with a cloak that had teleportation powers. Alongside the third incarnation of the Serpent Squad, Sidewinder was able to return the crown to company president Hugh Jones.[1] However, after that stint, he decided to form his own criminal organization, the Serpent Society. Given his ability to teleport, Sidewinder promised his recruits they would never be imprisoned. This attracted several snake-themed villains, and the Serpent Society was quite the success. He also started a romantic relationship with his teammate Black Mamba.[citation needed]

Later, Sidewinder was betrayed by his organization after Viper infiltrated the group. After being poisoned, he was aided by Diamondback, who gave him the antidote, and the two escaped and survived. On being contacted by Black Mamba, Sidewinder repaid the favor when Diamondback was captured and sentenced to death by the Society and its new leader King Cobra, saving her from death by lethal injection. Sidewinder however refused to help Black Mamba and the Asp escape King Cobra's grasp, saying Black Mamba would not want to be in his debt.[citation needed]

A robotic Sidewinder later appeared and was employed by King Cobra.[citation needed]

Most recently, Sidewinder was seen in an interview and has since retired from villainy.[2]

Sidewinder has no superhuman powers of his own.

Sidewinder is a skilled businessman, and was able to build the Serpent Society into a highly successful criminal organization.

Sidewinder possesses the normal human strength of a man his age, height, and build who engages in moderate regular exercise.

Like this? Let us know!
Retrieved from "https://marvel.fandom.com/wiki/Seth_Voelker_(Earth-616)?oldid=6463781"
Community content is available under CC-BY-SA unless otherwise noted.