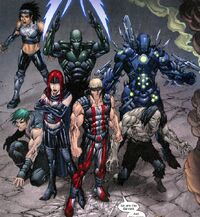 Agatha Harkness was in fact a gestalt team of superhuman beings known as the Seven. The Seven began operating in New York City, performing various deeds with the intent of one-upping the Fantastic Four. This brought them into conflict with the team, who were already suffering doubts among themselves due to Harkness's manipulation.[2]

The Seven beat Sue and tossed her into the New York Harbor, after being rescued by Namor she was told the truth about what Harkness and the Seven truly were. Harkness used her feminine wiles to seduce Johnny Storm, catching him at a moment of vulnerability, she was able to kidnap him and bring him back to a hidden Tan-Ed-Drul hatchery concealed beneath Nursery Two in Pinhead Buttes, Oregon. Susan regrouped with the Fantastic Four and traveled to Pinhead Buttes where they engaged in a final battle with the Seven - a battle that cost the villains their lives.[3]

Retrieved from "https://marvel.fandom.com/wiki/Seven_(Earth-1610)?oldid=5550353"
Community content is available under CC-BY-SA unless otherwise noted.