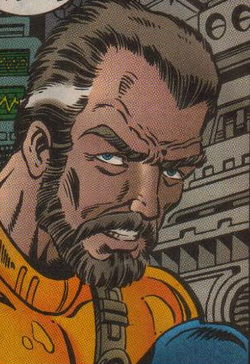 Seward Trainer was a genetics expert that was in the employ of the High Evolutionary. He was sent to spy on the cloning experiments that were being conducted by the Miles Warren. He became an assistant to Warren himself. However, one night he was caught stealing some of Warren’s files by Scrier, an agent of Norman Osborn. Scrier used this opportunity to blackmail Trainer by threatening to tell Warren about his unfaithfulness. He told Trainer that he would not tell but only if he would serve his needs whenever Scrier requested him. Trainer reluctantly agreed, unaware he was actually a pawn in a much grander scheme.[1]

The time came when Trainer was needed by Norman Osborn. Osborn sent out Scrier to tell Trainer to tamper with the Jackal’s equipment so it would read that the clone was the original Peter Parker, while the real Peter would read as the clone. Trainer did as he was told and the Jackal received the false examination results, unaware he was actually been duped. Shortly after this, the clone, who began to call himself Ben Reilly, left New York to pursue a new life. However, Osborn wanted to keep tabs on the clone for future use and used Trainer to keep track of him. Trainer did his job well, even going as far as making contact with the clone when Ben was ill and needed medical treatment. However, Osborn did not anticipate a bond developing between the two that resembled a father-son relationship, Trainer providing Ben with fake references during his travels that would allow Ben to find work for a few months at a time before the forged credentials were exposed just after Ben moved on. Osborn feared that this bond would complicate his plans.[citation needed]

Ben Reilly returned to New York years later when May Parker suffered a massive stroke and lapsed into a coma. Ben wished to be with her during her final days. Around this time both Ben and Peter made contact with each other but , more importantly, the Jackal had also resurfaced. He began to play mind games by declaring both Peter and Ben to be the clone. Jackal was still under the belief that Ben was the original and Peter the clone and all of his actions were based on this assumption. His games made Peter and Ben wish to examine themselves conclusively to determine who was the original and who was the clone. Ben suggested they go to his friend Seward Trainer to help them.[citation needed]

However, Osborn had sent another of his agents, Mendel Stromm a.k.a. Gaunt, to make contact with Trainer days earlier. Osborn promised to restore Stromm’s decaying body and knew that Trainer had the scientific knowledge to fulfil this promise. That is why he felt it appropriate for the two of them to make contact. Stromm threatened to tell Ben and the Jackal about Seward’s betrayal unless he cooperated. He would tamper with the test results so they would declare Ben to be the original and Peter the clone. Trainer did not want to do it but Stromm told him that Ben’s fondest wish would be granted-the belief that he was the original Peter Parker after all. With this in mind Trainer agreed to bargain. Days later, the results were declared and Peter’s life was turned upside down. After some initial resentment, Peter moved to Portland to start a new life with his wife. He gave Ben his Spidey threads and wished him all the best for the future. With Ben’s dream realized, Trainer couldn't help but feel tremendous guilt over his deception.[citation needed]

However, Peter would shortly return to New York after the discovery of the new Spider-Clone's skeleton. Ben requested his help to investigate the findings and also asked for Trainer’s help, only to find he had mysteriously disappeared. Actually Trainer had relocated to the lab beneath the Multivex building and began developing the procedure to restore Stromm’s body. Peter began to doubt Trainer’s allegiance and as such began to suspect that the test results conducted earlier were false. However, Ben would not listen to Peter’s suspicions as he couldn’t believe that his friend would do such a thing. Unfortunately, Peter’s suspicions proved to be accurate when Ben was attacked by the Hobgoblin. It was only the intervention of Trainer that prevented the Hobgoblin from killing Ben. With Trainer’s treachery now in the open, both Ben and Peter agreed to help each other find out who was manipulating their lives.[citation needed]

Shortly after this, Trainer resurfaced. He had escaped from Stromm but was being pursued by the villain, now wearing a suit of robotic exo-armour. Despite his efforts to warn Ben of the danger now facing him, Trainer was cornered in a darkened alley just outside Ben's apartment building and was brutally slain, not by Stromm, but by his mysterious employer, Norman Osborn.[2]

Trainer was an experienced genetics professor with a good reputation in the scientific community.

Like this? Let us know!
Retrieved from "https://marvel.fandom.com/wiki/Seward_Trainer_(Earth-616)?oldid=6030593"
Community content is available under CC-BY-SA unless otherwise noted.