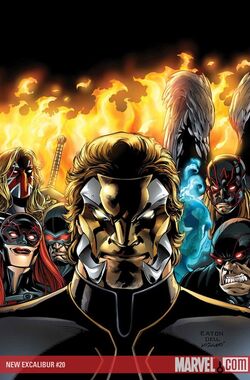 Base of Operations
Mobile in England, Earth-616
Affiliations

The Scarlet Witch's House of M enabled Shadow King of Earth-616 to escape to an alternate reality, Earth-6141. Once there, he possessed their version of Professor X and then corrupted his team of original X-Men. He maintained constant telepathic contact and control over them and forced them to kill all the heroes of their world. The Scarlet Witch's Decimation Wave enabled the Shadow King to bring himself and his team to Earth-616 in order to gain revenge on those who had crossed him. [2]

Not much was known about Shadow X, besides the fact that they were evil alternate reality counterparts to the original X-Men team (Cyclops, Beast, Angel, Marvel Girl and Iceman) and were lead by the Dark Professor X. Their first assault foiled by mutant singer Alison Blaire after she performed at a local night club. They had killed the mutant singer, though she managed to revive herself. They were defeated by the newly assembled team New Excalibur. [3]

Shadow X later resurfaced and became unlikely allies of Excalibur against Albion and his Shadow Captains. However, the war for London took its toll, and each member of Shadow X was killed in the struggle that followed.[4]

Equipment: Uniforms: All of their costumes appear to be black leather with red accents

Retrieved from "https://marvel.fandom.com/wiki/Shadow-X_(Earth-6141)?oldid=5550388"
Community content is available under CC-BY-SA unless otherwise noted.