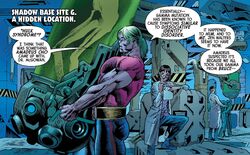 Site G was a science facility operated by Shadow Base built below Los Diablos Missile Base. Following the Hulk's coup on the organization, its base of operations was moved to Site G since knowledge of its existence was limited to Shadow Base's science team, which was the only branch of Shadow Base that didn't see any desertion after the change in command.[1][2]

After Hulk was apprehended by Gamma Flight and Shadow Base Site G came under attack by Del Frye and Rick Jones, who were both under the control of the Leader, Hulk Operations disbanded and Shadow Base was abandoned.[3]

Later, Doc Samson, Puck, and Shaman went to Los Diablos Missile Base to retrieve Samson's dead body in Site G so he could leave Sasquatch's body. As they entered the area, they witnessed Frye and Rick, forcibly fused together, emerge from belowground.[2]

Like this? Let us know!
Retrieved from "https://marvel.fandom.com/wiki/Shadow_Base_Site_G?oldid=6018495"
Community content is available under CC-BY-SA unless otherwise noted.