watch 12:19
History of the Shadow King
Do you like this video?
Play Sound 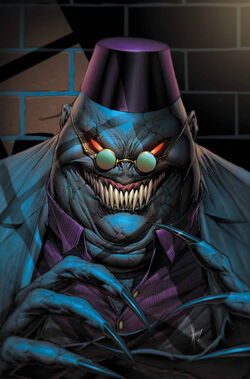 Happiness is a lie. Life is horror. The light is always dying, all across the universe. The last star will flicker out someday. When it does, all that remains... shadow. And I will be its king.

The Shadow King is allegedly a multiversal manifestation of the dark side of the human consciousnesses, spawned by the first nightmare. When the mutant Amahl Farouk's power developed, Farouk psychically controlled those around him, feeding on the shadows in their souls and secretly merging with the Shadow King, who had been transferring from host to host since the dawn of humanity.[2]

Shortly before World War II, Amahl Farouk was believed to have worked with Baron von Strucker on a plot to destabilize Britain's political structure, with the intention being Britain allying with Germany in coming war, or at the very least, staying neutral.[5]

Shortly after encountering a young Storm, Charles Xavier walked by a restaurant in Cairo when he was suddenly hit with a powerful psychic attack. Realizing the culprit was inside, he confronted the Shadow King, then known as Amahl Farouk. The two engaged in a fierce battle on the astral plane. Xavier defeated Farouk, whose body slumped over in his chair. But Farouk's evil mind continued to exist on the astral plane, calling itself the Shadow King. (It was also hinted that Farouk was just a body inhabited by the Shadow King).[1]

Many years later, the Shadow King sought to attack Xavier, still angry that he had been defeated. He was able to take over the New Mutant Karma due to her own mutant ability of possession making her vulnerable.[4] Farouk possessed Karma for many months, and his eating habits made her grow as corpulent as his last host body. When the New Mutants inadvertently discovered Karma under Farouk's possession, they fought for her freedom and won, forcing the Shadow King out.[6]

The Shadow King also chased the de-aged Storm in Cairo.[7] He possessed the body of F.B.I. agent Jacob Reisz as his new permanent host and kept up the search for Ororo. He corrupted the doctor Lian Shen into being his slave and used her and Hounds to hunt the Wind-rider. She was able to escape with the help of Gambit.[8]

Meanwhile, Farouk also began manipulating Moira MacTaggert and the inhabitants of her Muir Island facility. This led to Moira and others on Muir adopting more aggressive behavior patterns.[9] Shadow King attempted to compel Val Cooper into executing Mystique for him, and for a time believed she was successful.[8] Eventually, the outside world took notice of Farouk's activities on Muir. Xavier was recently returned from space, and his X-Men were captured on Muir by Shadow King's thralls. Xavier arranged with S.H.I.E.L.D. and X-Factor to make a strike against Shadow King. Farouk believed he had an edge over his foes, since his pawn Val Cooper maneuvered Jacob Reisz into being FBI liaison to the mission. The King was caught off-guard when Cooper was revealed as Mystique in disguise, and his host body was killed. Farouk jumped into Xavier's son, Legion, on Muir Island, but the X-Men defeated his other thralls. In the ensuing psychic battle the backlash re-injured Professor X's legs and spine, but Farouk was apparently destroyed once more.[10][11]

Shadow King later caused the Psi-War, tricking Psylocke into causing a massive wave of energy that disrupted psionic powers across the world. However, he stretched himself too thin attempting to link with all the minds on Earth and was defeated by Psylocke in her new shadow astral form when she assaulted his personal psionic nexus. The Shadow King then became trapped in Psylocke's mind and was unable to enter the Astral Plane.[12]

When Psylocke perished in combat with the mutant hunter, Vargas, the Shadow King was free again and attempted to attack the X-Men. However, it seemed Rogue's acquired memories were too much for him to handle, and he was defeated once again.[13]

The Shadow King later appeared in Britain possessing an alternate reality Charles Xavier and using that reality's X-Men as his Hounds. He was able to bring the Shadow X-Men back to Earth-616 because of the events of M-Day. He and his Shadow X-Men were defeated by New Excalibur and placed in prison. After an attack on a prison transport failed to free him, he attacked the transport's pilot, Sage. She reflected his mental assault, destroying Xavier's psyche. Soon after, he took control of a guard stationed by the body, and had him utter the word "Psylocke." Psylocke visited the unconscious body and the Shadow King revealed himself. The Shadow King could no longer control Psylocke after her resurrection, so he attempted to get revenge on her by having her watch New Excalibur kill her brother. Psylocke caused the Shadow King's host body to have a stroke, flat-lining him and was just about to plunge her psychic sword into the body when she suddenly disappeared in a flash of light.[14]

The Shadow King later re-appeared in his old Farouk body and approached the journalist Harper Simmons. He gave Simmons footage of X-Force assassinating people so that Simmons would go public with the existence of X-Force.[15] It was later revealed that the Shadow King was working with a new Brotherhood of Evil Mutants.[6]

After Proteus was released from the Astral Plane,[19] Professor X, now simply going by X, convinced Psylocke to form a psychic network and draw its power to push back his influence. The Shadow King took advantage of this strategy and accessed the network to escape from the Astral Plane through X's body.[18] After the Shadow King subdued the X-Men, X managed to recover and worked together with Psylocke to create a deeper psychic network, gathering enought power to destroy the monster once and for all.[20]

During his assault on Muir Island, it was Shadow King's dark influence that corrupted the Storm bio-synth, starting her on the path that saw her join the Consortium, slay Wolverine, and take control of Wakanda.[21]

An aspect of the Shadow King was an agent of Apocalypse. He was usually seen manifested as a cloudy face inside of Apocalypse's sanctum. He was the first to detect the presence of Nate Grey, prompting Apocalypse to send his assassins to attempt to kill the youth.[22] When Angel's assistant Karma was captured by Apocalypse's servants, the Shadow King psychically tortured her into revealing the location of Magneto's X-Men.[23] He later attempted to read the mind of Bishop, but Bishop's memory of the original reality (Earth-616) was enough to expel the Shadow King from his mind.[24]

Finally, the Shadow King followed Nightcrawler to the sanctuary of Avalon by hiding in the mind of Apocalypse's minion Dead Man Wade. There he took control of the minds of the many of Avalon's mutant and human refugees, causing great carnage. Nightcrawler, with the assistance of the psychic Damask and the time-stopping Switchback, was able to physically teleport into the astral plane and destroy the Shadow King's mind. The casualties caused by the Shadow King's attack were enough to convince Destiny to accompany Nightcrawler and the X-Men on a mission to Apocalypse's stronghold; her presence was pivotal to the heroes' success in restoring Earth-616 and repairing the timestream.

The Shadow King would survive, and return to a host body in Apocalypse's citadel. He would advise Apocalypse when Domino failed to capture the X-Man.[25] When the nuclear bombs were launched by the Human High Council, he would detect all the death and destruction and inform Apocalypse about the strike. Apocalypse would retaliate by unleashing his sea-wall defense system.[26]

After Weapon X betrayed the X-Men to become the heir of Apocalypse, the Shadow King became his agent and chief telepath. He also regained his psychical body as Ahmal Farouk.[citation needed]

Absorbed by Charles Xavier and used to become Onslaught.[citation needed]

The Shadow King possessed Professor X and turned him dark and by extension used him to corrupt his students and turned them into Shadow X.[citation needed]

In a world where Phoenix lost her powers instead of dying, the Shadow King used Mastermind as a decoy to get in close to Jean Grey. After killing the mother, he claimed her infant daughter, Rachel, and the psychic potential she possessed as his new host body.[27]

Charles Xavier would be assassinated by Cable leading to widespread human/mutant violence.

In this reality, Charles Xavier would arrive just prior to the Shadow King taking full control of those who lived on Muir Island and used his mental powers to free them from his growing influence. Although his initial plans were foiled, the Shadow King would soon find new enjoyment by the growing negative emotions sparked from the human/mutant violence following Xavier's assassination.[29] The Shadow King's current activities remain unrevealed.[citation needed]

The Shadow King is a multi-universal ethereal entity extending into each reality as a tendril of its larger self, requiring a host body to exist in the material world.

Telepathy: Shadow King is a telepath of a very high order to the point he has been stated to be a "true Omega Telepath".[30] According to Storm, with the exception of Charles Xavier, Shadow King is the most powerful telepath on Earth and has easily taken over the minds of strong-willed individuals such as Gentle and Black Panther without their knowledge.[31] He has also shown enough capability to mentally control high class telepaths such as Marvel Girl and Psylocke.[32]

Normal human male with little regular exercise when alive. As an astral entity, Shadow King has no physical strength.[35]

When manifested as a gladiator on the Astral Plane, Shadow King usually appeared armed with Roman weapons.[1]

Like this? Let us know!
Retrieved from "https://marvel.fandom.com/wiki/Shadow_King_(Multiverse)?oldid=6513847"
Community content is available under CC-BY-SA unless otherwise noted.