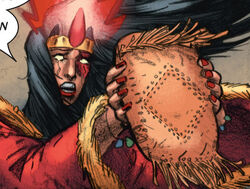 The pouch is a Sarcee artifact which allows the bearer to access spells and items via a sort of extradimensional portal. It has been handed down to the Shaman of the Sarcee tribe for many generations. The pouch seems to be currently in the possession of Shaman's daughter, Talisman.[citation needed]

Smart Alec later went mad looking into it; his body was shrunken and placed in the pouch by Shaman. The Void which the pouch accesses may in fact be the same dimension as the Crossroads, since the soul of Walter Langowski, which had been trapped in the Crossroads for a time after a failed attempt to inhabit the Hulk's body, was later able to inhabit Smart Alec's body and re-emerge through the pouch.[citation needed]

Alpha Flight was nearly destroyed when the pouch was turned inside out, and Talisman was trapped in the Void for a time as a result of attempting to help her father return the Void to the pouch.[citation needed]

Like this? Let us know!
Retrieved from "https://marvel.fandom.com/wiki/Shaman%27s_Medicine_Pouch?oldid=6432283"
Community content is available under CC-BY-SA unless otherwise noted.