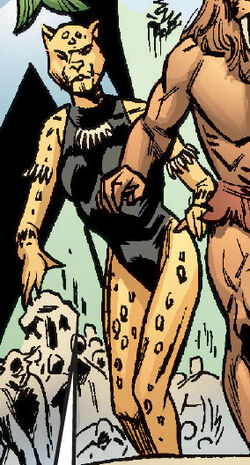 The past history of Shanna O'Hara of Earth-9997 mirrored that of her Earth-616 counterpart. In recent history, her exposure to the Terrigen Mist caused Shanna to mutate into a humanoid with leopard characteristics. She and Ka-Zar continued to act as protectors of the Savage Land.

When Captain America and Mar-Vell came to the Savage Land to seek a passage to Limbo to collect Anti-Metal, the two heroes sought out Ka-Zar and Shanna. They brought them to Sentinel City where they appealled to Toad (who now ruled this land) to allow them access to the portal to Limbo. Shanna stayed behind while the others traveled on, due to her fear of confronting Belasco again.

Shanna and Ka-Zar later welcomed the Wakandan's to their land who came to rebuild their nation and escape from the Wendigo which were stalking them.

The full of extend of Shanna's powers following her mutation are unknown.

Seemingly those of her Earth-616 counterpart.

Like this? Let us know!
Retrieved from "https://marvel.fandom.com/wiki/Shanna_O%27Hara_(Earth-9997)?oldid=5054619"
Community content is available under CC-BY-SA unless otherwise noted.